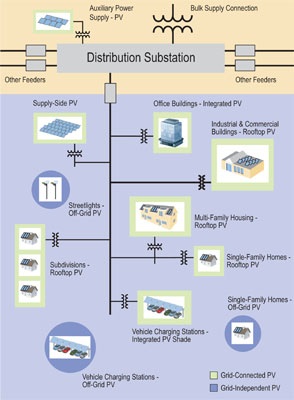 With distributed sources, there can be a mix of grid-connected and grid-independent sources. For example, take the combination of photovoltaic sources in this figure. Ideally, there should be a mix of centralized and decentralized (distributed) generators.

Part one of this series sketched out some of the regulatory and financial constraints that must be considered when planning to use alternative methods of generating electricity. We must think differently about the distribution of electricity before we consider the details of the different technologies. Historically, when it has been decided that more power is needed, a new plant is constructed, and it is either connected to existing power transmission lines or new lines are built. The amount of power able to be produced using traditional methods is a function of the plant size, the availability of fuel and consumer demand. The problem with using nonpolluting resources, such as wind and sunlight, is they are fuels over which we have little control. Sunlight and wind are not stable resources, meaning there is no guarantee how much power they will supply at any given moment.

Conversely, there are good reasons to use renewable resources. They are free and never deplete, and they do not pollute the environment. So it is worthwhile to expend the effort needed to solve these problems.

The creation of an electrical grid has established the basic means by which different generating facilities can feed power to a wide area. When one locality is drawing too much power for its local utility to handle, power can be moved in from other utilities that are not so heavily loaded. This same structure can be adapted to allow nontraditional sources to get in on the act. Adding more power to the grid from alternative sources, such as wind and solar, means that less will have to be added by fossil-fuel-burning power plants.

At the moment, wind and solar power seem to be the two technologies closest to being used in a significant way. In addition, solving the grid interaction problems for these two will also open the way for other alternatives, such as fuel cells, geothermal and biomass.

Using large generating facilities based on solar and wind energy creates the problem of keeping the supplied energy fairly stable and predictable so as not to destabilize the grid. Therefore, these installations have to be located in areas that have plentiful and predictable supplies of sun and wind.

Sunlight currently is being used to produce electricity through two basic methods: solar thermal electricity (STE) and photovoltaics. Although both methods are found in large-scale centralized facilities, STE is the older and more straightforward application of the two.

With solar thermal electricity technology, the sun’s heat is a fuel source to create superheated steam to drive conventional turbines. There are two types of STE. The more prevalent type is a parabolic trough system in which long rows of mirrors with a parabolic cross section reflect sunlight onto a pipe filled with a synthetic oil. The pipe runs along the focus of the parabola. The oil serves as a heat-transfer medium. The mirrors are mounted on motor-operated structures that track the sun. This is the oldest, most reliable and least expensive form of solar-generated electricity today, according to an article in the summer 2007 issue of the EPRI Journal.

A series of these installations was built in California’s Mojave Desert, the first of which started generating 13.8 megawatts in 1985. There are now nine installations in the desert—Solar Energy Generating Stations (SEGS) I–IX—producing a total of almost 354 MW, tied into the California energy grid. The largest of these, SEGS VIII and IX, each produce 80 MW. Together, these installations comprise the world’s largest solar power plant.

Another form of STE is called a central heater, or solar tower, type. It uses an array of mirrors that track the sun and focus its light onto a central receiver located at the top of a tower in the array’s center.

Photovoltaics is the process by which solar energy directly produces an electric current by the photoelectric effect. It was first observed in 1839 by French physicist Edmund Bequerel; the physics of the process was described in 1905 by Albert Einstein.

The first actual photovoltaic module was built at Bell Laboratories in 1954 but was costly and inefficient. In the 1960s, however, the space industry saw the technology as a practical means for providing electricity for spacecraft. NASA developed versions of solar cells that were reasonable in terms of cost and efficiency that were later considered for earthbound applications.

Based on semiconductor technology, a single cell produces a small electric current depending on the intensity and wavelength of the impinging sunlight. To provide useful levels of voltage and current, large numbers of cells have to be connected in series and parallel. A typical arrangement is for about 40 cells to be combined into a module. About 10 modules make up an array, measuring up to

The largest photovoltaic farm in North America is in operation today at Nellis Air Force Base in Nevada. It covers 140 acres of capped landfill, with more than 72,000 panels containing more than 6 million cells, producing a total of 14 megawatts. Other large photovoltaic installations are being built in Germany, Spain and Australia.

At the other end of the size scale of alternative technologies, photovoltaic arrays easily can be built onto the roofs of factories and homes.

But solar isn’t the only technology moving to the smaller scale. Some manufacturers, such as Southwest Windpower, Flagstaff, Ariz., are building wind turbines that generate less than 100 kW and are designed to power an individual building.

We’ve explored how some of the technologies work, but how do they interact with the grid? What needs to be solved for alternative energies to be considered less “alternative”? With distributed sources, there can be a mix of grid-connected and grid-independent sources; for example, see the mix of photovoltaic sources in the figure on page 93. Ideally, there should be a mix of centralized and decentralized (distributed) generators.

Michael A. Anthony, a senior engineer at the University of Michigan and a member of the National Fire Protection Association electrical Code-Making Panel 1, suggested in a June 2006 NEC Digest article that, instead of choosing between centralized and decentralized electricity, it might be best to use both. He suggested it might be viable to construct microgrids where a strip mall or homeowners association could install its own distributed generation facilities and then connect or disconnect from the national grid.

Of course, the future grid must be capable of accepting and distributing energy returns. In order for a system of distributed resources to work well, the grid must handle this for both technical and economic reasons. From the technical side, this is one way to make up for the variability of wind and solar resources. The economics suggest the cost of producing electricity by renewables can be reduced if excess power can be sold back to the utility.

One solution to help manage this type of system is what has been dubbed a “smart grid.” In their EPRI research paper, “Achieving Smart Grid Interoperability through Collaboration,” Matthew P. Wakefield and Mark McGranaghan wrote that a smart grid makes higher levels of distributed resource integration possible.

“The value is maximized by leveraging distributed resources at both the local and overall system levels as a ‘virtual power plant’ to better match energy supply with demand along with related value-added benefits,” they wrote.

What is meant by a virtual power plant is the aggregation of a number of electricity-producing resources by means of computer-controlled integration. In this case, a group of resources is treated as though they were elements of a single generator, and this way, they would all be controlled simultaneously. To accomplish this, the smart grid system must be able to transmit information on consumer demand and supply availability and balance the two. Supply and demand must be capable of being measured and then communicated to the consumer and the provider. Wakefield and McGranaghan define the smart grid as “… one that incorporates information and communications technology into every aspect of electricity generation, delivery and consumption in order to: minimize environmental impact; enhance markets; improve service; reduce costs and improve efficiency.”

One piece of this system is net metering, which enables customers’ electric meters to turn backward when they generate more electricity than they use, according to the U.S. Department of Energy. But net metering alone cannot integrate distributed generation into the grid. Advanced metering infrastructure (AMI), which provides the means for the meter to send and receive information from the utility, is a needed addition. According to Wakefield and McGranaghan, the problem with AMI is that there is no commonly accepted standard for data transmitted between the metering point and the utility. In order to integrate a system for transmitting and receiving the necessary information, there has to be a universally accepted communications standard. Ideally, the AMI communication should be compatible with the whole range of building control and information networks.

The type of communication and control data that must be exchanged includes transmitting whether the remote generator is drawing power from the grid or adding power to it. But that is only one piece. For wind, weather forecasting is important, so the utility can predict in advance the availability of wind-supplied power.

Part three of this series will describe where we are today in terms of our technical ability to produce electrical energy by some of these alternative means.

BROWN is an electrical engineer, technical writer and editor. He serves as managing editor for SECURITY + LIFE SAFETY SYSTEMS magazine. For many years, he designed high-power electronics systems for industry, research laboratories and government. Reach him at [email protected].