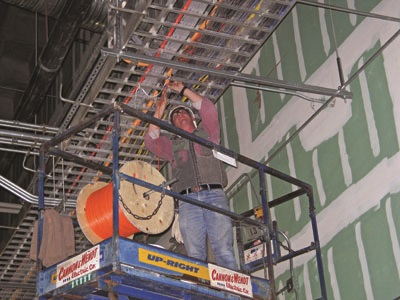 IN JULY OF 2003, ground was broken near Phoenix for construction of a new stadium for the Arizona Cardinals National Football League (NFL) franchise, which has been playing at Sun Devil Stadium at Arizona State University. Worth $355 million, Cardinals Stadium occupies approximately 25 acres and has 63,000 permanent seats, a massive project overall.

The seating is expandable to up to 73,000 for special events such as the Fiesta Bowl and the Super Bowl, and it also has 88 private luxury suites and 7,400 club seats. The domed stadium boasts a retractable roof and North America’s first natural grass roll out field, which remains outside the stadium until game day to get the maximum amount of sunshine and nourishment. This allows unrestricted access to the 152,000-square-foot concrete stadium floor for trade and consumer shows, conventions, concerts and other sporting events.

The retractable, 12-million pound, 234-by-400-foot tray, in which the grass field resides, rests atop tracks and will roll out on steel wheel sets powered by small electric motors. The roll out takes approximately 45 minutes.

“The roll out field saves $50 million, since it is more economical to move the field than to have the entire roof retract,” said Albert Wendt, president of Cannon & Wendt Electric Co. Inc., Phoenix, the lead electrical contractor on the project.

Design it and build it

Cannon & Wendt was one of three electrical contractors asked to provide a design/build proposal for the $26.5 million traditional electrical and low-voltage portion of the project, completed in July 2006. The company was invited to bid by the Tourism and Sports Authority; the Arizona Cardinals; general contractor Hunt Construction Group, Scottsdale, Ariz.; and architect HOK Sport, Kansas City, Mo.

“We had been placed on the prequalified short list of bidders based on our previous relationship with Hunt Construction, with whom we have worked for more than 15 years on numerous projects,” said David Fagan, vice president, Cannon & Wendt. The company is known in the area for successfully completing similar sized projects in sports and convention facilities and has the necessary financial and manpower resources to handle a project of this magnitude.

“Cannon & Wendt met all the criteria for this project, from financial and quality manpower resources to the ability to participate in a forward-looking design/build environment and develop the electrical designs necessary to achieve the project’s goals,” said Bob Aylesworth, executive vice president of Hunt Construction.

As part of the design/build process, Cannon & Wendt worked with ME Engineers Inc., Wheat Ridge, Colo., to create the drawings for the electrical systems; Climatec, Phoenix, for the design of the fire alarm system; and Honeywell Automation & Control Solutions, Phoenix, for the security system design. The company held regular meetings with the owner to discuss the project’s goals and then worked with the engineers, architects and designers to incorporate any changes into the drawings, keeping in mind budget constraints and job-site realities.

“We continually refined the drawings and design of the stadium’s systems throughout the construction process,” superintendent Sterling Woods said.

Using an average of 60 electricians, six technicians and a peak of 96 personnel, Cannon & Wendt’s design and installation responsibilities for the new stadium included the power distribution, lighting, fire alarm and security systems. Field electricians first routed power from the local utility’s main power equipment located inside the facility to high-voltage switches in the two main electrical rooms in the northeast and southeast corners of the stadium.

“It’s unique for a utility’s equipment to be located inside a facility, but the company agreed to comply with the owner’s desire to maintain the stadium’s aesthetics,” Fagan said.

The high-voltage switches feed six 4,000 amp, 15kV double-ended substations strategically located on the stadium’s service level. From the substations, power is transformed to 480 volts, then distributed to about 90 480-volt distribution panels to feed power to the mechanical equipment, elevators, retractable roof, the roll out field and lighting. From the 90 distribution panels, power is also transformed to 120/208 volts and fed to about 300 low-voltage distribution panels to provide power to 66 concession facilities, offices, locker rooms, telecommunications equipment, mechanical dampers, the fire alarm and security systems, and about 7,000 convenience outlets.

The stadium’s sports lighting system consists of about 640 1,500 and 2,000 watt sports lights mounted directly on catwalks suspended from the roof.

“In any indoor stadium with a retractable roof, the lighting cannot be mounted on poles,” said Ken Bowcock, project manager.

Cannon & Wendt also installed the stadium’s interior lighting, including 400-watt metal halide high bay fixtures surface-mounted on the ceilings on the main and upper concourses. The lighting package also included metal-halide and fluorescent lay-in fixtures for the offices, concession facilities, locker room and ticket offices. In addition, all of the egress points of the stadium have several thousand decorative fluorescent light fixtures to provide both lighting for emergency evacuation and to create a night time starburst effect purely for aesthetics.

The security system for the stadium is state-of-the-art. Field electricians installed EMT conduit in exposed areas and smurf-tube for imbedded areas and multiconductor copper cable and security devices, including door monitors and card access readers for offices and luxury suites. The company also installed 45 closed-circuit television surveillance (CCTV) cameras to monitor activity in the public and vault areas.

“The wiring for the security devices and cameras are routed to a security command center on the lower level and terminated in the security racks,” said Bowcock.

For the fire alarm system, the owner was allowed to have a passive smoke control system, rather than a smoke evacuation system.

“Before smoke from a fire could hurt anyone, the building would already be evacuated,” Woods said.

Before getting permission for the passive system, the owner ran several computer simulations, which demonstrated that 65,000 people could be evacuated before any smoke accumulated to hazardous levels. The system includes about 80 duct detectors installed at the return air intake ducts, some of which are so large that 20 detectors, placed a foot apart, were required.

Cannon & Wendt also installed more than 2,000 horns and horn strobes to alert people of an emergency evacuation and a small number of pull stations in maintenance areas.

All of the fire alarm system devices are wired to 37 local fire alarm panels that signal the main panel through shielded cable. The main panel is located in the security command center and monitored by security staff, which has a three-minute delay to verify the event before the notification devices are activated and the local fire department is automatically notified.

In a building as large as the Cardinals’ stadium, material distribution was a serious issue during installation.

Each group of electricians had a dedicated material handler that delivered materials in a golf cart to the group’s foreman.

“With a single person constantly shuttling back and forth with materials for each crew, we ensured that staff did not have to waste time waiting,” Woods said.

The company also had an on-site inventory manager to ensure materials and equipment were replenished daily.

Height was another challenge electricians faced. About 35 percent of the work performed on the service level—which houses the main kitchens, the four main electrical rooms, the chiller and boiler plants and the locker and storage rooms—was 40 feet high.

“Productivity at that height decreases because so much time is spent just going up and down on the high-level lifts,” Bowcock said. The height also dictated materials were managed effectively to avoid time wasted by retrieving forgotten items.

Communication, according to Fagan, was instrumental in the success of the project. Information flowed freely between Cannon & Wendt, the engineers and architects, and all of the team members were willing to discuss the differences between the project’s overall vision and job-site realities. Regular team meetings were conducted to discuss issues and resolve them.

“Almost every time there was an issue or concern, it was resolved the same day,” Fagan said.

Constant communication and the desire to bring the best to the owner, and the users of the facility, drives the project. And because of the involvement of all parties, Cardinals fans are already enjoying their new stadium.             ¶

Bremer, a freelance writer based in Solomons, Md., contributes frequently to ELECTRICAL CONTRACTOR. She can be reached at 410.394.6966 or by e-mail at [email protected].

Cannon and Gross Electric was founded in 1945, and two years later, Albert G. Wendt, now president, joined the company as an apprentice electrician. In 1957, he became a partner and the company’s name was changed to Cannon & Wendt Electric Co. Inc. The company specializes in the commercial, industrial, institutional, data center, sporting venue and hotel markets and is considered one of the premier design/build and design/assist contractors in Arizona. With an average of 250 to 300 electricians in the field and 25 office staff providing design, engineering, project management, estimating and budgeting, and accounting and administrative support, the company averages sales in excess of $45 million. In 2001, the company formed the Cannon & Wendt Technologies division to meet its customers’ growing structured cabling, security system and audiovisual needs.