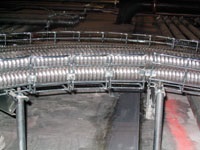 Some cable tray manufacturers have experienced double-digit sales increases over several years, so why does cable tray still account for only 10 percent of the cable pathway market?

According to several major manufacturers, cable tray sales have enjoyed strong growth in recent years. In 2006, Cooper B-Line experienced an increase of more than 25 percent in cable tray sales, and in 2004, Cablofil, then owned by ICM Group, reported a 14 percent annual growth rate over eight years with $47 million in North American sales. In the mean time, over the last three years, Chalfant Manufacturing has experienced 10 to 15 percent annual growth in its wire mesh cable tray line. Other companies, such as Snake Tray, also have prospered.

“It’s an exciting time to be in the cable tray business. There are great opportunities everywhere,” said Roger Jette, president of Snake Tray.

The U.S. market for cable tray is estimated to total approximately $225 million in annual sales. However, compare that to the more than $2 billion sold of all other types of pathways, including conduit, raceway and wireway.

According to a report published by The Freedonia Group, a market research company that tracks industrial sectors, “Conduit demand is expected to grow 1.6 percent per annum to 1.8 billion feet in 2009.” So, despite cable tray use growing at a much faster rate than conduit, cable tray systems continue to be chosen far less frequently by specifiers, installers and end-users.
Why is this?

Saving time and money is a win-win solution

Every contractor and builder knows that the critical key to controlling costs for most electrical projects is to reduce, where possible, the overall installed costs, beginning with containment of labor costs.

Competitive bidding makes it an economic necessity to minimize project labor requirements by adopting products that are quicker to install and methods that help the contractor’s crew complete projects faster. Since contractors, construction firms and property owners all want to see cost savings, electrical manufacturers are consumed by the need to develop and introduce new products that lower installed costs. Many of the most innovative electrical products simplify installation and reduce on-the-job labor.

The Cable Tray Institute, which represents eight cable tray manufacturers, claims on its Web site that “cable tray provides the greatest versatility among cable support systems, while offering savings of up to 84 percent in labor costs.” So, it stands to reason, if cost savings such as this claim can be substantiated, one would expect cable tray use to be absolutely sizzling.

Sean Cheatham, cable tray segment manager for Cooper B-Line, pointed to the primary appeal of cable tray: “We compared the cost of installing 200 linear feet of aluminum cable tray with the same amount of rigid steel conduit and were able to show cost savings of over 75 percent. This figure is achievable through lower materials costs as well as less required labor to install cable tray.”

Central to lowering project costs is cable tray’s faster installation and the subsequent reduction in the amount of labor required. With the growing shortage of experienced electrical professionals, there is increasing pressure to strip away excess effort and unnecessary steps in order to reduce overall man-hours. By most measures, including the National Electrical Contractors Association labor rate index, cable tray projects can be completed faster, which benefits everyone.

“The overwhelming driving factor behind the trend toward wire mesh cable tray use in commercial installations is the need to value-engineer the project,” said Tim Place, president of Cablofil/Legrand. “This is due to material cost inflation and the shrinking skilled labor pool. Time and budget pressure on projects has driven the contractors to seek more cost-effective ways of delivering the project objective at a lower cost.”

“Wire mesh cable tray permits the owner to maintain the complete project as designed yet enables the contractor to gain the competitive edge,” Place said.

Based on cable tray’s proven ability to reduce install time and project price, it is somewhat mystifying why the industry has not adopted greater cable tray usage. What keeps many professionals from using cable tray when it appears to be a faster, less costly way to construct and install a highly functional and extremely flexible cable pathway infrastructure?

Key to specifying the installation of electrical service or communications and control systems is choosing the appropriate pathway or cable conveyance—the structure type used to support, fasten, direct and protect the installed wire and cable runs.

Electrical pathways include many different modes of supporting and routing installed wires and cables for power and low-voltage. The National Electrical Code (NEC) defines a cable tray system as “a unit or assembly of units or sections and associated fittings forming a rigid structural system used to securely fasten or support cables and raceways.”

A mounting body of proof underscores numerous cost-reduction and technical advantages, such as easier cable identification, additions and removal provided by a well-designed cable tray system.

Despite these advantages, cable tray usage in the United States lags behind Europe’s reliance on cable tray. The primary reason for this appears to be specifier buying habits in the United States, which have been shaped by a strong ingrained industry partiality toward conduit. Frankly, most electricians have been exposed to a pro-conduit mindset through decades of apprenticeship training programs.

“If cable tray is not specified by the system designer and the choice of cable support is left to the discretion of the contractor, they are more likely to select and install conduit for electrical distribution cabling,” said Cooper B-Line’s Sean Cheatham. “This is not the case with datacom networking professionals.”

Now, add to this the fact that ordering conduit is simpler than ordering cable tray.

Dana Black, executive vice president for PW Industries, pointed out that despite being listed under electrical products, cable tray requires more mechanical considerations, including how much weight per linear foot is required to be supported, as well as the distance spanned between support points.

“Cable tray has not grown as quickly as we might have expected because cable tray is more complex to learn about than conduit,” Black said. “Cable tray typically delivers big cost savings and installs much faster, but it requires more planning to prepare a cable tray system. Contractors aren’t always familiar with the different types of cable tray systems, so they often need technical guidance to select the best product for their applications. However, that guidance is something we always provide at no cost.”

Cable tray gets boost from the NEC

Another obstacle to broader cable tray use has been language in the NEC that previously limited its use.

Cooper B-Line’s Cheatham pointed out how the Code has frustrated cable tray manufacturers. “One of the historical concerns about cable tray use stems from the NEC. First of all, the Code focuses on the diameter of a single conductor cable by stating cable smaller than 1.0 inch is not to be used in cable tray. The original concern was ‘you’ll crush the cables’ and ‘they’ll create too much heat.’ Second, cable tray was originally limited to be used only in industrial applications,” Cheatham said. “Now, with a recent revision, the 2008 NEC states that ‘cable tray is not limited to industrial facilities.’”

Traditionalists point to cable tray’s open construction as a drawback, citing the superior cable protection provided by closed raceway structures. However, this argument has not kept cable tray from dominating the market in Europe, where more than 90 percent of all wiring and cabling—both for power distribution and communications and control—is supported by some form of cable tray.

In 1997, the IEEE published a survey of electrical industry professionals titled “Cable or Conduit—Who Uses It and Why?” that sought to illuminate “why the U.S. market has not rapidly embraced cable tray.” The survey measured preferences in four vertical industrial groups: oil refineries, chemical plants, pulp and paper mills, and industry consultants in an attempt to measure future trends and preferences in the use of cable tray systems versus conduit wiring support.

The survey found the following results:

The IEEE survey concluded, “one must examine the driving forces that people follow in this industry: safety, costs and simplicity. Safety is constantly built into the codes and standards as well as the equipment that is manufactured and installed. While costs are easier to measure, they are not always the main driving force that we think they are. Evidence of this is that while most agreed that cable tray offered cost advantages over conduit, many Americans still preferred using conduit. Is this because conduit offers greater protection, or because they are more comfortable using it at any cost?”
A decade after the IEEE’s survey, we still are trying to answer that question. However, it seems that with a broader effort by cable tray manufacturers to educate contractors about the huge economic benefits offered by cable tray systems, the number of cable tray users likely will grow. Just as important is the need for a concerted effort by the cable tray industry to support product training to introduce contractors, distributors and specifiers to the product selection ordering process that ensures a smooth, profitable cable tray project. EC
CARAZO is the president of Carazo Communications, a business-to-business technical marketing firm. He has more than 20 years experience in the marketing of technical products and services in the electrical industry. He can be reached at 516.921.7199 or [email protected].
Share this article

Dan Carazo is the president of Carazo Communications, a business-to-business technical marketing firm. He has more than 20 years experience in the marketing of technical products and services in the electrical industry. He can be reached at 516.921.7199 or [email protected].