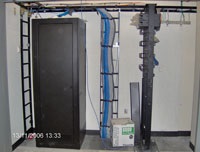 “I have always been extremely proud of the world-class military education provided at Fort Leavenworth,” said Sam Brownback, a member of the U.S. Senate Appropriations Committee. In November 2003, the Senate included $28 million for the initial construction of the Lewis and Clark Instruction Facility at Fort Leavenworth. “Young members of the Army leadership, as well as foreign military officials, receive some of their best training right here in Kansas,” Sen. Brownback said. As part of the Army’s Command and General Staff College, the Lewis and Clark Instruction Facility will replace Fort Leavenworth’s Bell Hall, moving up in the ranks as the Army’s premier educational facility.

The project encompassed 96 classrooms to support digital education, administrative and support space, a 2,000-seat auditorium, a 100-seat conference room, a 300-seat lecture hall, an administrative wing, and service areas. It was a challenging assignment for Capital Electric Construction Co. Inc., Kansas City, Mo., in terms of the infrastructure and the security requirements because the Lewis and Clark Center was built with the Department of Defense’s (DOD) “standards and force protections” that have been required for many government buildings even before 9/11.

“Some colleges have a lot of IT in the classrooms, but we’re not aware of any that can do everything that this facility will be able to do—from long-distance learning to being able to hook up to the Web to access military networks worldwide in order to get real-time training information from Baghdad if they want,” said Ron Reid, architect, The Benham Cos. LLC, headquartered in Oklahoma City.

The Command and General Staff College is an accredited university in addition to being a place to train the elite of the U.S. Army—majors, lieutenant colonels and colonels—in tactics, logistics, leadership, history and joint military operations.

“Majors in the army come here to prepare for their next 10 years,” said Lynn Rolf, director of Educational Technology, Command and General Staff College, Fort Leavenworth. “The new building is exciting because we’ve revamped our curriculum to be more current and relevant and reorganized our organizational structure. The facility and infrastructure will support and enhance the faculty and the curriculum,” Rolf said.

Prototype classroom beta tests facility
As the designers drew the plans and schedules for the project, Rolf, wishing to have the most efficient learning environment, made a suggestion regarding construction of the classrooms.

“I convinced our leadership,” he said, “that if we were going to build 96 classrooms, we should build one prototype model room built to the exact design specifications and house it with students and faculty to find out if the design was flawed and discover what we could do to fix it. Rather than make 96 big mistakes, we wanted to discover any mistakes and fix them in the prototype.” So as the steel frame was being installed, the contractors built a 1,000-square-foot prototype classroom. It had all the media inputs imaginable in an educational setting—VCR; DVD; a visualizer camera in the ceiling to allow the instructor to show a book, a magazine page or other items to the whole class; photographs in 3D; two cameras available for teleconferencing; a sound and light dimming system controlled by the instructor from a tablet computer; and two 65-inch plasma screens in the front. It also included three separate computer networks—a Combined Arms Center network (a standard network), a voice system network for telephones and the Battle Command and Simulation Network for students to simulate war games.

“It’s a closed network because they are using the Army Battle Command Systems and other IT applications that are actually in the field in the operations centers and deployed units,” Rolf said.

Conduit considerations
Students and teacher feedback about the efficiency of the room proved invaluable. “There were several modifications, both functional and aesthetic that resulted from building the mock up classroom,” said Todd Strickler, project manager, Capital Electric.

One change was to upsize the conduits to accommodate the large amount of cabling needed for the various networks, and another modification reconfigured the classroom to support the teaching methods.

“We work in staff groups of 16,” Rolf said. “Students are seated at eight tables arranged in a U shape, so everyone is facing front but able to see each other or break into smaller groups of four. If we gave the smaller groups an assignment, we wanted them to be able to pivot their desks to form smaller groupings,” Rolf said.

Since that action wouldn’t be possible if the desks were hardwired into the floor and concrete, the contractors installed a raised floor, so Capital Electric could move the floor boxes and reconfigure the network and electrical drops.

“That was important to us because we didn’t want to have the configuration of the room drive our training or educational requirements,” Rolf said. “As designed, each small group would have access to a white board on which to make notes and full access to the computers with their networks, replicating command headquarters just as the majors would be involved with in the field. Our students now get a chance to operate, experiment and work with some of the tools they’d see after graduation.”

As Capital Electric was installing the cabling to make the configurations possible, they discovered the array of junction boxes in the floor overlapped the large cable trays. Since there was not enough room to accommodate both, Capital Electric moved the cable trays 6 inches to the right.

When the time came to do the installation on the classrooms, Capital Electric applied what they had learned doing the prototype room and then faced other hurdles. “The requirements and specifications for certain qualifications and testing were so stringent that we needed to have not only properly qualified but also experienced personnel on the job,” Strickler said.

Installation of the network and audiovisual cabling was one of the areas that called for expertise. Separate networks originated from different locations, rather than from one. This design isolated the networks and only allowed certain information to be transmitted on certain cables. But the extent of the work created the biggest issue.

“Our biggest challenge was the aggressive schedule and the sheer volume of the work,” said Curt Mauk, project manager, structured cabling, Capital Electric, who worked with Strickler. “My team of 18 to 20 worked 26,000 man-hours in a 10-month period. Foremen Jesse Mauk and Mark Hilliard coordinated the work and did a lot of the ground work, [which included]... compiling lists that plotted the details for the installers, so they didn’t have to spend time figuring out from plans and drawings what they needed to do.”

“In the future, when the bandwidth required exceeds the capacity of copper cabling, they will have fiber to the desktop. That future proofs the installation,” he said.

“They did an exhaustive set of drawings that pinned down every piece of conduit to every room and where it needed to go,” said Doug O’Neill. “That was advanced thinking on their part, so that instead of using drawings from the architect with notes indicating six light fixtures in the room and where six plug-ins were needed—leaving it to an installer to figure out where to run all the conduits—they had it all laid out on drawings ahead of time.”

Capital Electric benefited from the step. “Because of the drawings, we were able to identify any problems earlier in the project and get responses back from the architect and engineer,” Strickler said. “It helped us have a better understanding of the building.”

Workers also completed cabling portions for the audiovisual systems and installed the lighting controls for the classrooms and lecture hall and in the auditorium.

Andy Wilhite, project manager, Capital Electric, oversaw and coordinated the installation of the lighting control systems and acted as the quality control officer and manager of materials procurement. The company also integrated the lighting controls to the audiovisual system, allowing commands to dim lights, turn on a projector or lower a projection screen to be activated using a touch console.

“In every classroom, the lighting fixtures are part of the dimming system and tied into the control system,” said Brad Hull, lighting controls specialist, Mercer-Zimmerman Inc., the manufacturer’s representative for Electronic Theatre Controls (ETC), Middleton, Wis. “The most interesting aspect was the sheer scale of the project. There are over 200 control stations throughout the facility. The control wire runs were so long; we had to find a creative solution within the architecture of the Unison control system, which includes 1,600-foot control signal runs. We had to stack the system into the building, so we could reach every single control station and not exceed wire run limits.”

“The stage lighting system in the auditorium was relatively complicated,” Strickler said. “It had 260 fixtures and a lot of networking and control cabling as well as the power.”

Capital Electric’s tasks also included expansion of the substation and addition of a 7,500 kVA transformer.

“The existing and new transformer work in parallel,” Strickler said. The company dual fed the main switchgear at the substation then ran two new circuits, 12,470 volts, up to the building, then installed a 480-volt distribution system that was spread out to 20 different locations. From those locations, they installed 250 miles of branch cabling in an electrical metallic tubing conduit system to provide power to lighting receptacles and equipment.

“We feel very good that the college is going to be proud of this facility when we walk away,” O’Neill said, “because it will be a showcase for the United States Army, the Corps of Engineers and Fort Leavenworth.”

“We feel a sense of pride having worked on it,” Capital Electric’s Strickler said, “and a sense of accomplishment to have been part of something that is going to help future leaders of this country.”

CASEY, author of “Kids Inventing! A Handbook for Young Inventors” and “Women Invent! Two Centuries of Discoveries that have Changed Our World,” can be reached at [email protected] or www.susancaseybooks.com.