The Antenna in Times Square 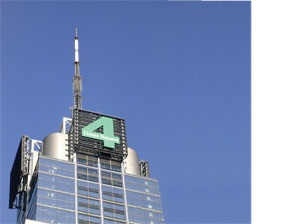 When the World Trade Center towers came down in 2001, New York was left with few options for radio transmitter sites. After eyeing proposed sites in Bayonne, N.J., and Governor’s Island, the city began looking at increasing the capacity of existing radio towers in Manhattan. That led the Durst Organization, the real estate owner/management company of the Condé Nast Building at 4 Times Square in New York, to undertake an epic project—tripling the height of the existing radio tower atop its 700-foot-tall building in the center of Times Square.

Electrical contractor Hatzel & Buehler Inc., New York—one of the oldest electrical contractors in the United States, founded in 1884—installed antennas and transmission on the new broadcast tower and has been working at 4 Times Square ever since, increasing radio and television capacity by adding combiners and connecting in additional broadcasters. Fred Geller Electric Inc., Woodside, N.Y., also worked on-site, adding a third generator and two 500-ton electric chillers as well as adding a riser of 4,000A at 480V AC.

The building came with structural capacity to sustain a large antenna project. In fact, it was designed to provide transmission capabilities when it was constructed in the late 1990s. While an antenna “farm” such as this weighs 225 tons more than the previous antenna, with structural modifications, the building is now able to support that weight.

Those structural modifications, which increased the strength of the structure to accommodate the weight of a much larger tower, involved welding additional steel reinforcements to the main framework of the building from the top down.

Delro Industries, Englewood, N.J., welded the new steel into the existing building structure at various points as determined by the structural engineers. New base steel was hauled up the side of the building using a derrick.

The renovation project eliminated the old 132-foot tower and replaced it with a 385-foot tower, which can transmit for every FM and TV licensee authorized in the New York area. For some broadcasters, the new tower became the main transmission site, while it is an alternate for others.

The contractors worked in Times Square, one of the busiest places on earth, on top of an occupied, 52-story office building. This meant they had to install the series of high-power broadcast antennas without disrupting operations or inconveniencing building tenants. The IBEW Local 3 shared the narrow rooftop with New York Ironworkers Local 40, which erected the base and tower structure on which the antennas stand.

All participants on the roof needed to have nerves of steel to deal with the heights and cold, wind and heat that went with it. Electricians and ironworkers began the installation in March 2003, working through snow and ice, into the heat of summer and then into the next winter chill before finishing the outdoor work.

In addition to added structural reinforcement to the building, the project required demolition of the original antennas that were no longer serving their purpose. The demolished materials were brought down by derrick, and the same derrick brought up new antennas, cable and other equipment. Each time the heavy items were swung over Times Square, the road was closed for several minutes, as many as 80 closures in all, said John M. Lyons, assistant vice president and director of broadcast communications for the Durst Organization.

The antenna farm now has five antennas, each raised to the roof. A 6,000-pound Andrew Trasar Channel 68 antenna

with FAA beacon stands on top. Below that is a 26,000-pound Dielectric Master UHF antenna, followed

by a 20,000-pound Dielectric Master UHF antenna. Under that series of antennas stands a Dielectric Master high-band VHF antenna, and finally, beneath that is a model 6016 Shively Master FM antenna. This antenna had twice as many dipoles as a standard 6016, mounted half-wave spaced to reduce downward radiation, according to Shively Labs.

Before the antennas were shipped to the site, Hatzel & Buehler tested and approved all of them at the manufacturing sites in Maine, Illinois and New Jersey.

One by one, the antennas were raised up the antenna stand on top of the building. By the time the raising was finished, the beacon was 1,118 feet from street level.

After that work was complete, Hatzel & Buehler did the electrical installation for several of the TV broadcasters in the building within their leased equipment rooms, including the normal electric service installation and distribution, transmitter and rack installation, and class E and pre-action installation.

All mechanical equipment in the building is housed on the 49th floor below the lower and upper mezzanines located between the 49th and 50th floors. That mechanical equipment powers TV transmitters and ancillary services. Racks for two-way and communications systems can be housed on the main roof. FM transmitters and combiners are on the 51st floor, and the 52nd floor houses the TV combiners. In the transmitter room, Lyons said, individual transmitters can be installed in the open, or rooms can be built for customers who seek the security of a private room.

The building also includes 4,600 tons of air conditioning, including new ones added by Fred Geller Electric, with no shortage of air to keep things cool.

The conditions in which electricians and steel workers worked were tight and precarious, Lyons said. “[However,] I never heard an argument between the trades. Cooperation was paramount up there, and not once did I hear voices raised in anger. Well, maybe once,” he said.

The tower was erected by Oct. 2, 2003, with the first TV broadcast on Oct. 30 (33 hours before the deadline), and new broadcasts continue to this date.

In addition to the sheer size of tower, the 4 Times Square antennas and combiners were the first major broadcast facility designed from inception to accommodate digital radio. The combiner uses back-feeding to transmit digital signals to the feed system of the antenna.

Current clients at the site include backup transmitters for Clear Channel’s WHTZ, WKTU, WAXQ, WWPR and WLTW. Also using the site as a backup are WNYC, WPAT, WSKQ and WCAA. Columbia University’s WKCR station is on the air full time from the site, while Univision’s three TV stations and ABC/Disney channels are on the tower, as well. Some channels are analog signals while others are DTV. Channels 53, 55 and 68 are primary transmission sites, and 7, 41 and 45 are backup.

Flash Technology provided lighting for the completed tower. Strobes are on during the day, and red lights shine at night, all of which are tied together and flash simultaneously.

Since 2003, Hatzel & Buehler has been doing continuous work at the site, adding combiners and bringing other locations into the radio and TV network.

Hatzel & Buehler completed another TV station installation in December 2007 and is currently working on a public service installation. Most recently, the company has installed microwave dishes for ancillary two-way radio services. The company also is building a new transmitter room and adding a new combiner.

“More stations will be coming into the antenna system,” Lyons said.

The entire antenna project, at $25 million, was finished on time and within budget, including the tower, antennas, transmission lines and combiners, relocating the building’s water mains, and adding 6,000 square feet of additional transmitter room space.

Lyons is delighted with the results and had good things to say about Hatzel & Buehler.

“They are still a major contractor for the broadcasters, so I think that speaks for itself,” he said. “Hatzel found a niche with the broadcasters, while Fred Geller Electric and other Local 3 contractors provide support throughout the balance of the building.”