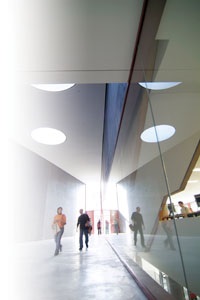 Hindering adoption of advanced lighting control strategies is the idea of whether these strategies work together in combination as advertised to produce consistent energy savings and worker satisfaction, thereby justifying a higher initial cost.

This was the subject of a new office lighting field study by the National Research Council Canada (NRC) Institute for Research in Construction. It demonstrates control strategies combined successfully to generate energy savings as high as 47 percent in an open-plan office while raising the occupant’s environmental and job satisfaction.

“The industry has long sought objective evidence that lighting controls not only save energy, but also benefit organizations in other ways, such as occupant satisfaction,” said Guy Newsham, senior research officer, NRC. “This research provides such evidence.”

The study was conducted over a year in a real-world, open-plan Canadian office building. Four years earlier, the building owner installed 195 direct/indirect lighting fixtures centered over each cubicle workstation on 3½ floors, replacing 2-by-4 recessed, T8, deep-cell parabolic fixtures and reducing lighting power density from 0.92W/square foot to 0.54W/square foot. Each fixture housed three 32W T8 lamps and two electronic ballasts. An inboard lamp produced the indirect component, constantly emitting uplight. The two outboard lamps—connected to a dimmable ballast—produced the direct component, emitting downlight and providing a maximum light level of 45 foot-candles on the task plane. The uplight component was not dimmable or switched by local controls, thereby ensuring light uniformity across the ceiling plane when the fixture operated. The downlight component was dimmable using several methods.

Each fixture had an integral occupancy sensor and photosensor. After detecting a vacant workstation, the occupancy sensor could signal the ballast to gradually dim the lamps until switching them off. Then, the system could reset light output to the previously set level when the workstation became reoccupied.

This way, the researchers could study three control strategies in a real-world setting—occupancy-based automatic shutoff, daylight dimming and individual occupant dimming—and estimate both aggregate lighting energy savings and the relative contributions of each control type to the savings. A fourth control strategy—global automatic on/off switching from a central point of control based on a schedule—was in effect, but not included in the study.

The system was recalibrated before the study, and monitoring software was installed to collect detailed data over a year. Occupants in 86 workstations participated by using the advanced controls, while occupants on a neighboring floor, still using the conventional recessed parabolic system, also participated, allowing a comparison between the two groups. When new employees were hired and entered the study area or existing employees were reassigned, the IT department, responding to a request by the energy manager, quickly re-enabled the individual control feature.

By replacing the recessed parabolic fixtures with the direct/indirect fixtures, lighting power was reduced by about 40 percent. The advanced controls accelerated lighting energy savings to 67–69 percent compared to the previous system. The controls ensured that not all lighting power was used at once, so the average lighting power density in use was about 0.28W/square foot. The direct/indirect fixtures with the advanced controls operating produced a combined 42–47 percent energy savings compared to the same fixtures without the controls in operation, with concomitant reductions in peak demand. Occupant surveys revealed a correlation between the presence of the controls and higher environmental and job satisfaction. The site manager estimated a simple payback for the advanced system, based on energy cost savings alone, to be two to four years in a new installation and four to 12 years in a retrofit.

“This study demonstrates that the right package of controls, properly maintained, can produce large, persistent energy and demand savings coupled with benefits to occupants and their organizations and refutes suggestions that these kinds of control systems cannot work well in open-plan offices,” Newsham said. “Although such systems do have a higher initial cost than standard office lighting systems, the overall benefits may justify the investment, especially in the context of other investments organizations make in their employees and their work environments.”