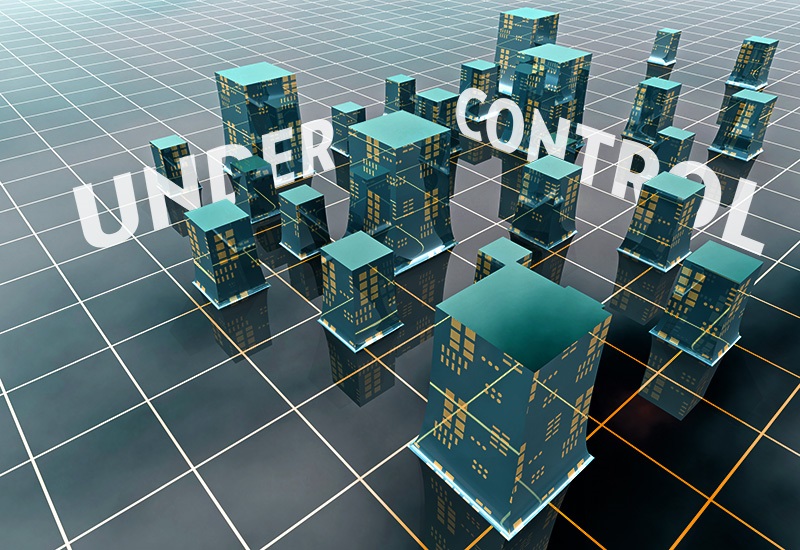 Fixture by fixture, lighting in American cities is transitioning from the traditional metal halide domain to light-emitting diodes (LEDs), not only on city streets, but also in landscaping and commercial building settings. LEDs are providing a long-lasting, energy-efficient light source with a lowering price tag, and they more frequently are coming with controls that further reduce costs for users—whether public entities or businesses.

The City of Los Angeles is testing one example with GE Lighting. The city has undertaken a GE LightGrid pilot that aims to bring intelligence to its LED fixtures with remote monitoring units. Los Angeles is testing LightGrid outdoor wireless controllers, which could eventually be deployed to the majority of the city’s more than 140,000 LED streetlights.

The LightGrid technology enables the city to remotely monitor each of its streetlights using data from a GPS unit on each fixture to mark the longitude and latitude of that unit. The controllers themselves twist into standard NEMA sockets on each of the fixtures and then encompass what GE Lighting calls the LightGrid network. With this network, the city can track energy usage and lighting data through a central management system accessible with a Web-based portal.

The benefits for a municipality are data—detailed analytics of its street lighting system, enabling the city to implement its energy-saving plan such as setting on-and-off and dimming schedules for each light, especially in late-night use in low traffic areas.

LightGrid is one of a growing number of control-based options available today for LED lighting in outdoor environments, whether city streets or commercial buildings.

In addition to controls, some large-scale advancement in adoption of outdoor LED lighting has taken place in the past few years and is fueling the technology’s acceptance. While LEDs initially had a limited “throw” with light degrading over distance in comparison with metal halides, the further design of LED chips and lenses are making the light more direct, providing a long range that three years ago would have been impossible.

While heat dissipation outdoors was a problem in the past, that too is being resolved with better materials and better technology, including the use of nanotechnology.

The change is evident
Altogether, the multiple changes have made LEDs a reasonable choice for street lighting, parking lot lighting and landscape environments.

Vrinda Bhandarkar, senior market research analyst at Strategies Unlimited said the entire lighting market will soon converge around LEDs. She said that more than 50 percent of new installations consist of LED lights in places such as public streetlights, bridges and commercial lighting outside large buildings.

However, the conversion of the entire market will take some time. She pointed out that, even if 10 percent of streetlights were replaced in a year, that would still be a small piece of the market.

In landscape lighting, the LED’s advantage is its longer lifetime, requiring fewer maintenance events in areas where such work can be difficult. In addition, Bhandarkar said, prices are coming down, making the total cost of ownership within reach for some customers who have until recently watched LED technology from the sidelines. However, she pointed out, just what kind of lighting is used in a commercial application often depends on how much money is left after construction.

“Lighting comes last, so often people cut corners,” to ensure a project comes within its projected budget, she said.

Therefore, public installations still lead the commercial sector when it comes to LEDs. Cities like Boston and Seattle are moving from vapor lamps to LEDs to light up their streets. The City of Boston claims that LEDs can keep the city’s streets safer through fewer streetlight outages since LEDs have a life expectancy of 15 years, compared to the approximately five years of mercury vapor streetlights.

Other benefits of LEDs are clear. LEDs offer truer white light quality, allowing colors at night to seem more natural. LEDs minimize light trespass onto homes and businesses by the “aiming” of fixtures, and they offer more consistent light distribution, resulting in fewer dark spots. Each LED also can be guided with secondary optics to spread the light more evenly and ensure clearer, consistent illumination at all distances from the pole.

Ultimately, the City of Boston leadership argues that up to 60 percent decrease in energy use and carbon emissions from LED lamps.

Boston began replacing its mercury vapor streetlights with LED lamps in November 2010, and, by the end of 2012, it had converted nearly half of its 25,000 fixtures. It will save Boston $2.8 million annually in electricity costs with continued conversions underway.

Seattle’s city management has similar expectations. Using the U.S. Department of Energy and the Municipal Solid-State Street Lighting Consortium Retrofit Financial Analysis Tool, Seattle managers have estimated the simple payback for LED conversion of residential lights at 7.7 years. Once all residential fixtures have been replaced, the new fixtures will save the city an estimated $2.4 million in annual energy and maintenance costs. The city intends to replace about 34,000 fixtures by the end of 2014.

Controls in outdoor lighting, such as the project underway in Los Angeles, is the most significant LED technology trend, said Teresa Bair, GE Lighting product general manager, outdoor and industrial divisions. The company is also designing products to protect against lightning strikes and dirty energy such as power surges.

In the meantime, GE Lighting is also offering optimization of photometry to make LED lighting more effective than it was a few years ago, Bair said. In addition to effective light output, each installation needs fixture configuration and orientation planning to be designed intelligently, and that’s an area GE is now taking a part in. The company sells a larger product offering intended to allow contractors and engineers to create a lighting system that meets the needs of the customer without wasting light.

But the technology is not just for cities and municipalities. Commercial customers with outdoor needs can benefit as well. For instance, Cree luminaires are sold based on lower energy consumption and costs, reduced maintenance expenses and improvement in lighting performance. The company has installed its LED luminaires at locations such as auto dealerships where the color and tone of lighting can affect auto sales. At corporate campuses, it can help companies meet their LEED requirements and achieve nearly 50 percent savings in annual energy costs.

Resistance and technophobia
As technology companies vie for a role in LED lighting growth, some businesses have already disappeared, while others are seeing exponential growth. One growing business is Illuminix, which has provided LED indoor and outdoor lighting in Colorado for three years, according to owner Dennis Gronbeck. And technology has been advancing quickly since the business opened.

One of his concerns is that the technology may be getting ahead of installers. Many contractors, Gronbeck said, are resistant to LEDs, thinking in terms of metal halides and fluorescents. They need to evolve their thinking.

“It’s a matter of acceptance and recognition,” he said, adding this is not only for contractors but also customers. He said end-users are increasingly asking for LED solutions when they begin to learn the basic physics—that LEDs require less maintenance and consume less energy.

“The industry has been through a shakedown,” he said.

The early-solution providers who, in some cases made unsupportable claims and soured early adopters, stymied LED lighting’s launch.

When big-box stores started selling LED lamps, the public took notice. Although the commercial and roadway installations use a more sophisticated product, the common presence of LEDs in the stores influences the buyers in other sectors anyway.

“It gives people some comfort,” he said.

Illuminex often tests LED lamps against a similar metal halide products in settings such as against a wall, in a gymnasium or other location, to showcase a visual comparison. The results? Gronbeck said the LED renders crisp, clear color that tends to mollify the skeptics.

Gronbeck understands why contractors often prefer to install the lighting type to which they are most accustomed. But, he said, there’s too much on the table environmentally and financially to ignore the need for more efficient lighting.

“We either need more power plants, or we have to save energy. Lighting is the low-hanging fruit,” he said.

When required
LED technology is also helping communities and building owners meet dark-sky initiative requirements; it can enable users to better control the aim of light and reduce bleed off onto adjacent properties, thereby allowing them to com­ply­ with local light­ing ordi­nances for reduced sky glow.

Tied with other green solutions
Further energy savings are possible with the LED lights that are linked with solar energy. Solar LED outdoor lighting usage has been growing as it becomes more cost-effective, when coupled with controls that could include motion sensors to detect when an individual is present and would require brighter lighting.Companies, such as Solar Illuminations in Florida, are selling solutions that will take the LED market beyond the realm of basic lighting fixtures.

Lumical Technologies Group, an LED lighting provider for both landscape and interior systems, in Sarasota, Fla., leverages the energy efficiency of LEDs as a selling factor to customers.

Unlike metal halides, he said, Lumical’s LEDs are encapsulated, weather-tight units. As a result, they shouldn’t need changing for 20 years or more.

Because the lamps are more efficient, they lend themselves to solar power, Paulin said. His goal is to have systems for entire landscapes of properties powered by two solar panels on the roof.

“I believe, in the near future, that will happen,” Paulin said.