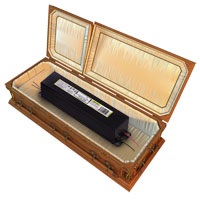 Once a venerable workhorse in commercial lighting, the fluorescent magnetic T12 ballast is now considered a dinosaur. All but extinct in new construction, there are still millions of these ballasts installed in commercial buildings throughout the United States. Now they are facing extinction in existing buildings, as replacement ballasts stop being available due to energy legislation.

From 2005 to 2010, regulations implemented by the Department of Energy resulted in the phased elimination of fluorescent magnetic ballasts for full-wattage F40T12, F96T12 and F96T12HO lamps. Subsequent energy standards created by the Energy Policy Act of 2005 targeted energy-saving versions of these lamps, such as 34W, 4-foot T12 lamps, on an accelerated schedule.

On July 1, 2010, the final phase of the legislation went into effect, prohibiting ballast manufacturers from producing even replacement ballasts that do not comply with the new energy standards. The result is the virtual elimination of the magnetic ballast aside from what distributors may have left in their inventories. There are a few exceptions, including ballasts designed for dimming to 50 percent or less of their maximum light output, for use in outdoor signs with two F96T12HO lamps at ambient temperatures of –20°F, or for use only in residential applications and with a power factor of less than 0.90.

This legislation has created a significant opportunity for electrical contractors to approach customers and prospects with a compelling message to upgrade lighting.

Spot replacement avoids the upfront cost and potential disruption of upgrading the entire system and allows the owner to fully realize the value of lamps and ballasts still in service. However, replacing T12 magnetic ballasts with compliant T12 electronic ballasts is at best only a delaying tactic as future regulations will eliminate the fluorescent T12 lamp. In July 2012, fluorescent lamp energy standards will take effect that are expected to eliminate most 4-foot linear and 2-foot U-shaped T12, many 8-foot T12 and T12HO, and some low-color-rendering 4-foot T8 lamps. To realize the value of the ballast, the owner may have to warehouse a significant number of T12 lamps or replace the T12 electronic ballast with a T8 electronic ballast within several years of its installation (as T12 and T8 lamps and ballasts are not cross-compatible). This creates a pay-now-or-pay-more-later choice.

Additionally, because T12 and T8 are not compatible, mixing T12 and T8 technologies in inventory presents a risk of installing incompatible lamps and ballasts in the lighting system on an ongoing basis, producing poor performance and even component damage. Mixing T12 and T8 technologies in the installed lighting system, meanwhile, can result in poor space and lighting appearance, while it also would affect uniformity of color, lighting levels and brightness.

A planned upgrade of the entire lighting system avoids these risks and enables full consideration of maximizing energy savings and lighting quality.

Upgrading to T8 systems, for example, can result in up to 50 percent energy savings or more in typical applications such as offices and classrooms. Options include 23W, 25W, 28W, 30W, standard-output 32W and high-output 32W lamps and extended-life T8 lamps powered by basic-grade and NEMA Premium high-efficiency electronic ballasts. Adding lighting controls, such as occupancy sensors, low-voltage relay panels, line-voltage dimming, wireless controls and other options suitable for existing spaces, can accelerate savings. The biggest opportunities for planned upgrades of T12 lighting systems are in buildings with high energy rates, lighting that is not automatically turned off when it is not being used, and overlighted spaces.

Another significant advantage of a planned upgrade is lighting quality can be considered. For example, many older lighting systems were originally designed for different space uses and primary tasks.

Additionally, many older systems were not well designed, creating poor lighting conditions for users. In this case, it may make sense to advocate for a redesign with entirely new lighting fixtures. While redesigns are even more involved than retrofits, they allow the owner to address issues such as fixture efficiency, visual comfort, uniformity, and the color and light on walls and ceilings, while correcting problems such as glare, shadows and flicker. This allows the contractor to engage the owner in a conversation that goes beyond simple payback and explores even more important customer benefits such as worker satisfaction, retail sales, student learning and more. Options include direct/indirect pendants, volumetric-distribution recessed fixtures, wall lighting, etc. More sophisticated control options can also be implemented in a redesign, maximizing savings.

We are in an era of regulated efficiency in which the least-efficient lighting options are being eliminated from the market by government mandate. These mandates create opportunities for ECs to engage customers and prospects in a dialogue about their lighting needs, equipment availability, cost reduction and visual comfort improvements.