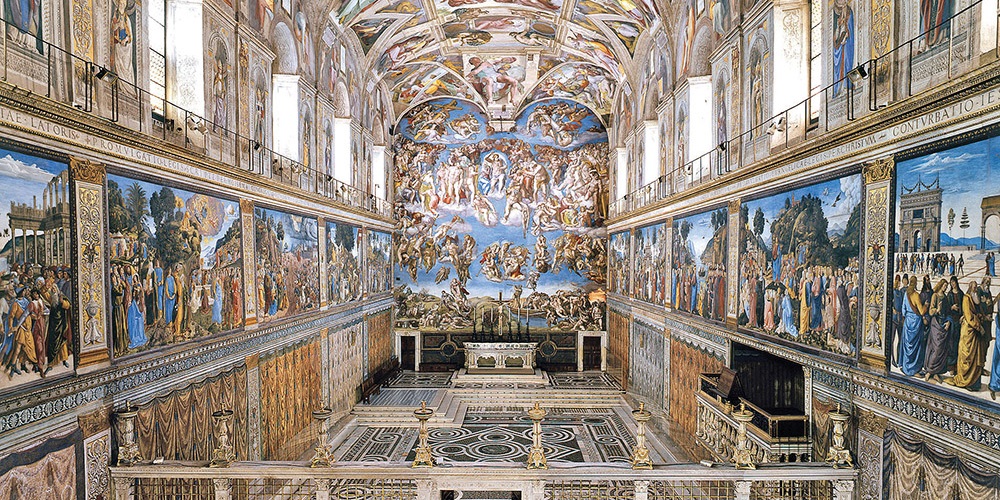 Simply stated, the Sistine Chapel is a really big room with many remarkable paintings, but there are many stories behind the hall and its art.

The sturdy rectangular structure was built in the late 1470s as part of the Vatican’s fortified medieval walls, the job commissioned by the then general contractor Pope Sixtus IV (hence the name Sistine). It was designed to match, as nearly as possible, the dimensions of Solomon’s Temple as described in the Bible—130 feet long, 43 feet wide, and 65 feet high.

For more than 500 years, the chapel and its artwork have been about the intricate interplay of color and light, ever since the first brushstrokes were applied to its walls and ceiling by artists such as Botticelli, Perugino, Signorelli, and, of course, Michelangelo. It is the best one-shot, one-room museum of renaissance art in Europe.

The pictures are an illustrated distillation of Judeo-­Christian scripture, culture and thought. You can experience the most popular stories of the Bible just by looking up.

However, complications arose over time. Natural light streams in from 14 high windows that have not been opened for decades, and doorways allow only one person to pass through at a time. The confined space, along with questions of adequate lighting and lack of cross-ventilation, created logistical and preservation problems. Depending on the season, time of day and weather, artificial lighting is necessary, and the use of beeswax altar candles and torches held by the Swiss Guards took their toll on the artwork.

On Oct. 29, 2014, a switch was thrown in the Sistine Chapel, illuminating the walls and ceiling with the light from 7,000 light-emitting diodes (LEDs), rendering many of the scenes in the frescoes clearly visible for the first time in centuries.

How and why this happened is another one of the many stories about this remarkable room.

During the past few years, the European Union (EU) has funded a number of research and development programs for the renovation of existing structures of historic and artistic significance. One of the more ambitious projects focused specifically on frescoes of the Sistine Chapel using LED technology to enhance viewer appreciation, while ensuring the integrity of the artwork and, hopefully, reducing energy costs. The project’s code name is “LED4ART.”

In early 2013, the project was awarded to Munich-based lighting manufacturer Osram, which partnered with an international team of technical consultants from the Pannonian University in Hungary, the Institut de Recerca en Energia de Catalunya in Spain, and Fabertechnica in Italy.

Work began in April 2013, with Osram as the project coordinator, and electricians of the Vatican’s Servici Technici performed the installation.

The objective was to make accessible to the viewer standing in the chapel today what the art would have looked like under optimum natural lighting conditions in 1541, when Michelangelo put the finishing touches on the Last Judgment fresco on the altar wall.

However, at this point, things got complicated.

Michelangelo, and all of the other artists whose work appears in the chapel, mixed their own colors—they didn’t jump in a mule cart and travel to Home Depot on the Via Veneto for a bunch of gallons of swatch-keyed designer paint.

Typically, eight color samples are used to formulate an LED array. However, in this case, some 250 sections of the Sistine paintings were studied to get the correct color rendering.

“There was no hesitation in our decision to use LEDs to illuminate the frescoes,” said Carlo Bogani, executive project director at Osram. “We chose to use cooler color temperatures in order to simulate the display of the frescoes as Michelangelo would have seen them as he worked.

“So, the LED luminaire we developed for the project featured red, green, blue, as well as warm white LED light. Its four color channels are independently controlled to allow for fine adjustment of the color temperature between 3,000–4,000K. The chapel would have to be illuminated with LED light at 3,500K, so a sophisticated correction algorithm was developed that integrates the differing color perception of the human eye with various color temperatures into the spectral distribution of the LED light.”

It was a significant challenge to determine where the luminaires should be positioned so as not to be intrusive but to replicate the quality and direction of the natural lighting. Fortunately, the quasi-military nature of the chapel’s original 15th-century design included catwalks along both sides of the chapel for guards to make their rounds. Custom luminaires were installed at a height of some 30 feet on this narrow walkway, invisible to visitors but giving the impression that daylight is emanating from the windows.

“Twenty LED luminaires were installed on each side of the chapel, and each luminaire contains 140 red, green, blue and white high-performance light-emitting diodes,” Bogani said. “The original design of the luminaires was made more slender, enabling them to fit on the narrow ledge. In addition, 30 LED 50W spotlights were mounted in groups of three between the windows. When required, these can be motor-driven onto the ledge from their concealment.”

The new LED panoply consists of three installation groupings. The first lights up the frescoes on walls and the ceiling, the second is a “gala” treatment for special occasions, and the third highlights Michelangelo’s final contribution to the chapel, his rendering of the Last Judgment.

So what about the ducats, florins, bucks?

Various sources say that the lighting job went for $2.2 million, but lighting bills for the Sistine Chapel could be cut by almost 90 percent after the LED installation.

“In addition to using 70 percent less power compared to the previous lighting installation, the difference in illumination and clarity of the viewing experience is immediately apparent,” Bogani said. “As a result of the highly precise guiding of light, the artworks on the walls are now properly illuminated and can be appreciated more, whereas before the lighting mostly focused on the ceiling.”

Which brings us back to the often-forgotten artists who worked as a team before Michelangelo entered the picture. These competitive, cutthroat Italian renaissance artists would have shocked the shorts off Mario Puzo’s “Godfather” characters. However, over the course of two years, a half dozen of them collaborated to produce a series of frescoes that appears to the casual viewer as though they were done by a single artist. Paintings on the facing walls of the chapel depict the lives of Moses and Jesus.

Now these forgotten and ignored pictures can be seen clearly. But, is following the money what it’s all about?

Osram’s man on the ground (and up on the scaffold) during the Sistine Chapel’s LED installation was Mourad Boulouedine.

“When you have the opportunity to be one foot away from these frescoes and see the colors and the details, you begin to feel and understand how much hard effort and genius Perugino, Signorelli, Botticelli and Michelangelo poured into their work,” Boulouedine said. “You get the feeling they are looking over your shoulder through time and asking, ‘Is this enough? Is there anything else you can do so that people can see our pictures better?’” he said.

“During this job, I learned that art makes all of us happy. Now, watching the smiles on people’s faces looking at the pictures in the newly lighted Sistine Chapel, that is a remuneration that cannot be surpassed,” Boulouedine said.