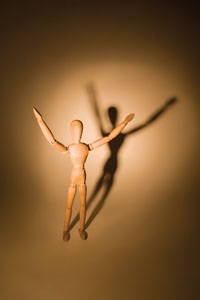 Lighting designers have a responsibility to provide lighting systems that deliver visual comfort, which goes beyond simple visibility by addressing issues such as glare. Lighting designers are concerned with illuminance (light level falling on a task), luminance (light intensity exiting the task toward the eye measured in candela, from which we gain the subjective perception of brightness), and luminance contrast.

Generally speaking, increasing light levels on a task increases luminance. If an object has a high luminance, it will be more visible, particularly if its surroundings have low luminance.

Excessive luminances and luminance contrasts, however, can cause glare, which can produce effects ranging from mild irritation to virtual blindness. It’s a fairly common problem. At least six out of 10 office workers experience some form of glare, either reflected from computer screens and/or reading material or directly from light sources, according to the 1999 Steelcase Workplace Index survey.

Disability glare is especially worrisome, as vision is virtually disabled. Reflected glare that totally obscures a task is sometimes called a veiling reflection. Discomfort glare occurs when a source of glare in the field of view is physically irritating to the eye. Overhead glare may occur for people performing head-up tasks in offices, classrooms and similar spaces illuminated by 2-by-4 recessed fixtures.

Overhead glare is different than other types of discomfort glare in that the offending light source is not in the field of view. The sensation of glare is caused by light falling from an overhead source and scattering at the eyebrow and cornea of the eye. Light may also be reflected into the eyes from the nose and cheekbones.

If glare is not addressed in design, users will find a way to correct it. According to the Steelcase survey, nearly half of respondents wanted a way to control glare. One out of six already took matters into their own hands, either removing or blocking the offending source of glare—sometimes by removing lamps or attaching cardboard to computer monitors. I have even heard from lighting designers about people wearing baseball caps in offices to avoid overhead glare.

Glare can be addressed in design in several ways. Consider the source/task/eye geometry for the application, which consists of angular relationships between the light source, task and user. If a glossy magazine appears too bright, it can be corrected by simply moving the magazine a little. Similarly, proper task placement, relocating or reorienting tasks, or moving the lighting fixture, if portable, may solve a glare problem.

While high reflectances on task or space surfaces may be useful to increase luminance, avoid specular or glossy task surfaces wherever possible, while noting that tiny points of high brightness, such as sparkle on silverware, may be desirable in applications where the owner wants to convey an atmosphere of elegance. Due to advances in computer screens, reflected glare is less of a problem than it was years ago in video display terminal (VDT) spaces but may still be encountered. Consider antireflection screen coating or filters.

If a source is producing offensive glare, consider reducing its luminance. Avoid direct sunlight penetration where people perform critical tasks. Similarly, avoid visible, excessively bright lamps. If bare lamps will be a potential source of glare, consider low-brightness lighting fixtures such as indirect or well-shielded direct lighting. In some applications, it may be possible to physically raise or reduce the area of the glare source. Consider placing light on walls adjacent to bright windows to reduce contrast, or provide shading. Similarly, if a task is excessively bright, consider increasing light levels on the task’s surrounding area, which will increase its luminance and, therefore, reduce contrast.

Note that a direct fixture with a very high optical efficiency may produce direct glare. Unshielded fluorescent striplights, for example, can be as efficient as 95 percent but would be considered a “glare bomb” by office workers. There is often a tradeoff between fixture efficiency and optical control; the more the fixture works to deliver light where it is wanted and block it where it is not wanted, the lower its efficiency. One way to tell if a lighting fixture is likely to produce glare is to look at its photometric report. A high concentration of direct light intensity emitted at a 55-degree vertical viewing angle in an office, or above 60 degrees in another application, is likely to produce glare.

Controlling glare plays a key role in visual comfort, and while there may be corrective options for existing spaces, potential problems are best addressed in initial design, which would incorporate the space’s task and the lighting system.

DILOUIE, L.C., a lighting industry journalist, analyst and marketing consultant, is principal of ZING Communications. He can be reached at www.zinginc.com.