Let Us Entertain You: LEDs Impress With Fantastic Displays 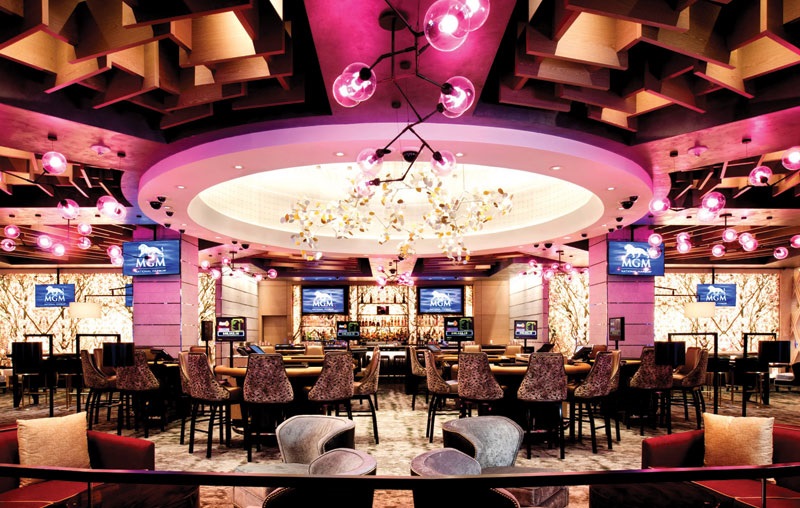 From high-definition panels to vibrant pinpoint light, from deep, true color to interactivity and animation, LED lighting is becoming the go-to option to create theatrics, mood and spectacle. Advancements in color rendition and color temperature, programmability and controllability have only increased their favor with restaurants, hotels, casinos, theaters and arenas.

The new U.S. Bank Stadium in Minneapolis, which opened its doors in July 2016, is one example. Home to the Minnesota Vikings, the franchise is the first in the National Football League to use LEDs exclusively at construction. The stadium’s architectural features provide ample natural light and daylighting. By night, they showcase an LED lighting system seen by stadium spectators and city residents alike. A lightweight, translucent roof spanning 240,000 square feet (the largest in North America) and glass walls create a jewel-box effect. The expandable 66,665-seat facility will host the 2018 Super Bowl.

“The control system allows us to use all the LED lights at once or focus down to individual fixtures,” said Bryan Harper, vice president of content and production, Minnesota Vikings. “It speaks to other systems too, allowing us to activate LED ribbon board animations, bathe the stadium in our team’s purple or present our logo in stunning resolution.”

Harper and his team handle entertainment efforts both in the stadium and across multiple media platforms.

“We wanted LED from the outset,” he said. “This efficient lighting source giving us flexibility in what we create—it triggers our creativity. For example, we were able to produce, with the help of a lighting designer, a Super-Bowl-caliber halftime show during our inaugural games in the new stadium.”

After Vikings touchdowns, the stadium darkens for a split second and then returns with bursts of lights, animation and pyrotechnics in the end zone. Animation also runs across the ribbon LED boards installed along the interior stadium bowl.

“We wanted the lighting to be both impactful and celebratory,” Harper said. “LED lights in concert with our state-of-the-art audio system and high-res video screens create moments for the crowd. We shoot 1,080p, so the video clarity is phenomenal on the LED boards.”

The system is programmed for different sporting events.

Ephesus Prism fixtures are used to illuminate the stadium’s indoor bowl with color.

“We spent a week and a half commissioning the Ephesus system running through the four lighting schemes,” said Josh Miller, senior MEP project manager for Mortenson Construction, the Minneapolis division of which served as general contractor. “Collecting final light levels followed. All the sports organizations have minimal light levels you have to meet to avoid shadowing on the field. That might require cross aiming some fixtures. Some of this geometry is handled in the lighting submittal phase, but it’s only a guess until you run the lights on the field.”

The range of capabilities of the stadium’s LED lighting system was showcased in a Viking fan-appreciation effort—a synchronized light and music show presented as a digital holiday card that can be seen at www.youtube.com/user/OfficialMNVikings.

“I think we are just scratching the surface in what we can do,” Harper said.

On the eastern shore of the Potomac River in Oxon Hill, Md.—just south of Washington, D.C.—is the MGM National Harbor. Opened on Dec. 8, 2016, the $1.4 billion complex is lit by LEDs, many of them customized to add dazzle to a 308-room hotel, a 3,000-seat theater, high-end retail, meeting and convention facilities, a casino, a spa and salon, and 15 dining establishments.

“Everything on the property is LED by intention,” said Maureen Moran, founder and principal, MCLA. “Their attributes in energy efficiency, flexibility, size, controllability and color were all pluses. They helped the building earn LEED Gold for New Construction. A Crestron central lighting control system communicates to a networked system for other building controls.”

“This project paid tribute to both the architecture and monuments of D.C., and the Potomac waterway,” said Nicole Fournier, director of interior design for MGM National Harbor. “The overall approach with much of our custom LED and lighting controls was dynamism and color.”

The Potomac Plaza is one example. It features an oval pool lit by color-changing LEDs. They illuminate 124 programmed vertical jets that shoot geometric shapes into the air. DMX theatrical lighting is used in the Harbor’s central atrium called the Conservatory, often highlighting seasonal settings.

“Color temperatures purposely vary throughout the spaces in this complex,” Fournier said. “So do color planes that will differ in the casino versus the lobby versus the spa. All of this requires customized lighting and controls that support the design objectives of each space.”

Moran used the casino as an example.

“The casino has lounges that feel different from the gambling area,” she said. “The moods are different. The Felt Bar & Lounge is a sort of escape, concealed but in the casino. It has an intimate feel. Draperies bring down the light levels. Its dark ceiling creates a nightclub vibe, especially at night. The Blossom Lounge has a different energy. It’s exposed and very visible to the rest of the casino. The space pays tribute to the cherry blossoms of D.C. with its color palate, custom LED fixtures and soft tone lighting.”

Fournier said that how the light played was important.

“Having interior design consultants working with Maureen was invaluable,” she said.

“We talked about how the fixtures would work, driver placement in the ceiling, and engineering the lighting installations for easy maintenance access,” Moran said. “Decorative lighting fixture manufacturers help us with proper installation and cross check. I wanted to ensure we had the proper fittings in the ceiling and proper support to handle weight.”

Moran finds design teams are getting more comfortable with LEDs as the light form advances.

“We certainly had choices before LED,” she said. “I might have used incandescent for punch, fluorescent or cathode for a broader or softer distribution of light. To achieve color, I’d have to filter them. LED combines all of these attributes into one source. That’s really an advantage.”

“To simulate water and motion, the suspended crystals that form the chandeliers are of varying lengths,” Fournier said. “In fact, we worked with several manufacturers for a number of other custom LED pieces in the casino.”

“By making the ceiling surface of the fixture stainless steel, the reflective property against the LED light amplified each prism of the octagonal faceted crystals,” said Vicki Atlasman, CEO, Gladstone Industries. “That created a multitude of pinpointed light and seemed to visually multiply the crystals in the fixture. The largest chandelier holds over 15,000 genuine crystals, the smaller over 10,000.”

LED custom fixtures are often statement pieces. Littman Brands, a division of Troy-CSL Lighting, City of Industry, Calif., has a custom lighting division that earned a 2016 Good Design Award for its Archetto LED Sculpture. Organized by the Chicago Athenaeum Museum of Architecture and Design, the award recognizes “the most innovative and cutting-edge industrial, product and graphic designs produced around the world.”

Archetto is a “kinetic” hanging light sculpture using a red, green, blue and amber display that illuminates 1-inch-thick glass tubes fastened with aluminum connectors and aircraft cable. The cable allows movement of the tubes, each evoking a bow playing a stringed instrument.

Nicolas Baldoni, director of custom and design for Littman Brands, drew inspiration from his great-grandfather Dante Baldoni, an Italian immigrant who manufactured string instruments in Argentina during the early 20th century.

“I wanted a kinetic design blurring the line between art and function,” Baldoni said. “With Archetto, I have digital control of 24 individual linear lighting elements that travel in a vertical plane. Each one represents a violin bow. Seven programs offer different waves of light helping communicate musical waves.”

While custom fixtures are often commissioned by a customer, Archetto is a product line for Littman lighting.

“Electrical contractors have helped enormously in finding the best way to install Archetto and other custom lighting,” Baldoni said. “Each of us gets better the more we do it.”

“LED lighting is changing all the time,” Baldoni said. “Custom lighting puts you in the middle of that change.”