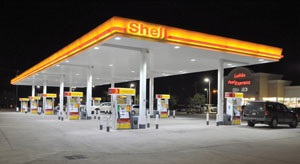 Outdoor Commercial lighting has changed significantly since electricity began to power it in the early 1900s. However, the advent and emergence of light-emitting diode (LED) technology with its efficiency and potential for new construction and retrofit projects would have astounded even Edison.

The list of commercial applications for LEDs has grown to include retail, petroleum and convenience stores, corporate campuses, healthcare, municipalities, parking structures, restaurants, and learning institutions. Wherever lighting is needed, there seems to be an LED solution.

“What LEDs bring is the opportunity of the possible—of being able to reduce energy consumption and deliver operations savings—with focused high-quality lighting. In a commercial space, those are very obvious factors because LED allows you to have targeted efficacy—or putting light where you need it,” said Kevin Orth, vice president of sales at Cree LED Lighting, Durham, N.C.

LEDs are on the radar for contractors and business owners alike, but the dialogue is reaching a higher level of discussion.

“The level of the technology is now where you’re not trying to convince somebody that it’s the right solution. It’s helping people understand how to make the best decision when selecting an LED luminaire,” Orth said.

LEDs are not without challenges. Wendy Norman, product specialist, outdoor products for Cooper Lighting, Peachtree City, Ga., believes there still are perceptions in the marketplace centering on cost and reliability. While Norman concedes that LED products can carry a higher initial cost, she points out that an LED option may allow for the use of fewer poles, smaller poles or fewer fixtures versus a high-intensity discharge (HID) solution. Quality LED outdoor luminaires can provide the required surface illumination with improved uniformity using less energy, compared to HID sources.

“Now, LEDs for outdoor are ubiquitous. Costs are dropping, utilities are providing incentives, and we have LM80, LM79, and now TM21 guidelines to more accurately interpret and predict LED fixture life and performance,” Norman said.

Key performance trend findings from the December 2011 “LED Lighting Facts Product Snapshot: LED Luminaires,” a DOE biannual report, have revealed that commercial outdoor luminaires are increasing in efficacy at approximately 17 lumens per watt (LPW) per year among various product applications. Outdoor area and roadway luminaires are available at light output levels greater than 10,000 lumens, equivalent to or greater than what typical MH and HPS systems with 150W lamps produce, but the majority of LED products have lower output levels.

“The great thing with LED lighting is lumen maintenance over a long life,” Cree’s Orth said. “One of the keys to a long life involves thoroughly managing thermal conditions. You need an LED product to run as cool as possible whether you’re in the Middle East or in Wisconsin.”

Retrofits vs. new construction
Industry experts agree that LED technology lends itself well to a variety of projects, regardless of the type.

“There are many additional advantages, which go unseen. In new construction, there could also be a reduction in the wire gauge size, which translates into savings in conduit purchased and trenching costs. Things as simple as that can be a tipping point for a project to go LED,” Norman said.“With new construction, people are already looking at sustainable building design, and LED lighting fits very well into that type of description, but you’ve got an instantaneous opportunity to save money with retrofits,” Orth said.

Norman agreed that LEDs in new construction have become the preferred choice, and retrofits also are leaning toward LED.

“The greatest demand currently comes from retrofits for the wide array of existing applications. Parking garages tend to have the fastest payback, even under a year, in many cases, where energy is at a premium and when utilities offer incentives such as if the fixtures meet the Design Lights Consortium (DLC) approved criterion,” she said.

In addition to enhanced payback scenarios, parking garages also represent a marketable partnership for LEDs due to their ability to interface with occupancy controls and building control systems to provide efficient dimming and high-low applications.

“You could have a space that is unoccupied 80 percent of the time. You don’t want it dark, but if you could put it in a low mode and save energy over an incumbent HID source, you’ve got the benefit of huge energy and maintenance savings,” Orth said.

“Solar and LED lighting technology marries the best of both worlds. The end-user gets the benefit of energy reduction and efficiency with LEDs as well as the offsetting energy generation with solar. As both technologies improve, less energy will be required to run the LED lights, and the more energy can be generated and pushed onto the grid,” Kawaguchi said.

Inovus Solar also sells solar LED lighting systems that function independently of the electrical grid, eliminating power bills and the need for supporting infrastructure, such as trenches, wires, conduits and circuits. The on-grid systems feed electricity into circuits during peak-rate periods for use or onto the electrical grid for the purpose of reducing operating expenses.

The technology and its application in the outdoor commercial market still must clear some hurdles.

“Many clients just want to see others who are already using the technology. Once they see how the solar lights work and how others are using it, they run pilot projects for their business and realize the savings,” Kawaguchi said.