The Advantages of Passive Optical Networks 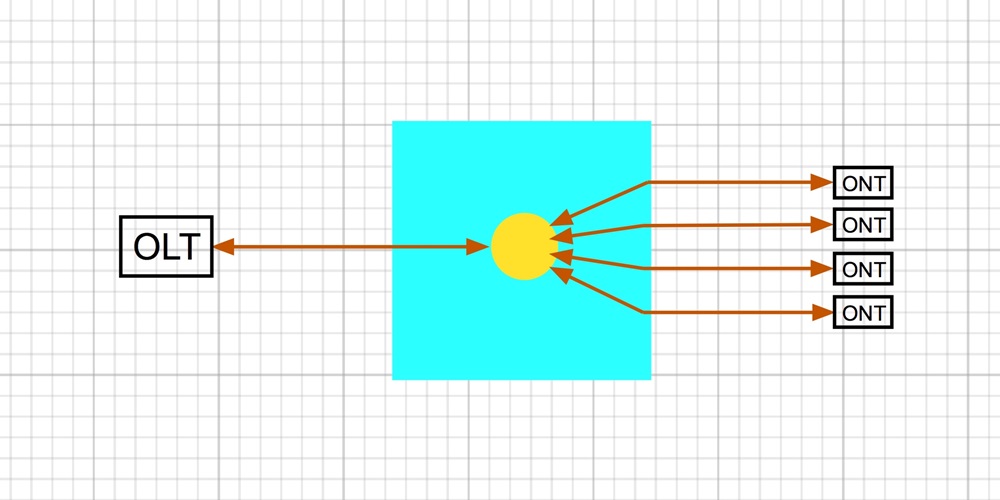 Around the world, hundreds of millions of homes and businesses are connected to the internet on optical fiber, and almost every one with a network architecture called passive optical network (PON). There are two main standards for PONs: GPON (gigabit PON) and EPON (ethernet PON). Both have options for speeds of 1–10 gigabits per second (Gbps).

The PON is based on a fiber optic component called a coupler or splitter. It’s a passive component that optically splits a signal input from a fiber on one side and sends the signal to all the fibers on the other side. If a splitter has four inputs and four outputs, any input on one side (the blue line on the left) is split and sent to all four fibers on the other side. Of course, the power is lower because the signal is split. Here, four ways means the outputs are ¼ the signal power of the input.

A splitter works bi-directionally; any fiber can be an input and an output, so one fiber can be used for transmission and receiving for devices coupled to the fiber. That means a device can be designed to connect to the network using only one fiber, offering considerable cost savings in the fiber optic cable plant.

The idea of a PON is not new. Back in the mid 80s a version of a PON became the first standard for a fiber local area network (LAN). Two engineers realized that a passive fiber optic coupler worked like an ethernet hub, so they created a network using the coupler and fiber links instead of electronics and copper cables. However, these couplers were expensive and not very efficient, so the network never became very popular.

Since the OLT signal is split and sent to all ONTs, every user sees all the other users’ messages, so the signals are encrypted, decoded only by the intended ONT. This encryption means FTTH networks are much more secure than regular networks, where signals are generally not encrypted.

We mentioned earlier that there are two main standards for PONs: GPON and EPON, both with options for speeds of 1–10 Gbps. GPON came first and has been used for most FTTH networks. To date, hundreds of millions of FTTH subscribers have been connected on GPON, and the sheer volume of the products have made them very cheap.

Cost is one of the main advantages of PONs. The splitting of signals means that up to 32 users can share one central office OLT port. In traditional networks, each user would have a dedicated port at the central office, so the electronics cost there is much lower in a PON. Since signals are sent bi-directionally on one fiber, and only one fiber is needed for 32 users from the central office to the splitter near the users. Much less fiber is required, which further lowers costs.

Even the cost of electrical power is lower. Less equipment at the central office means less power and less expensive backup power equipment.

The simplicity of a PON also makes the cost of installation much lower. When installing the large number of connections on a FTTH network, many service providers use prefab cable and splitter systems that only need to be plugged into the ONT at the user location, simplifying fiber installation.

With all the advantages of a PON, it did not take long to consider using this technology in LANs. The ONT changed from ethernet/phone/TV conversion to an ethernet switch with four or more ports for gigabit ethernet with power-over-ethernet. The first users were government agencies, which often have a very large number of users and is comparable to a small city FTTH network. The cost was a selling feature, as was the encryption of the signals, since government organizations are always concerned about security. Before long, PONs were also being installed in offices, hotels, hospitals, libraries and even a chain of nursing homes.

It’s easy to see the advantages of a PON; just look at this photo of the computer room of the new San Diego Central Library. It supports 4,000 users on nine floors in the library and a tech high school that shares their building. Yes, those three fiber ducts with one cable each serve the entire building.

And the photo below shows the entire electronics system for the building.

Planning for the library took more than a decade. The original design was based on structured cabling where each work area would have two Cat 5 cables. The building was built to the original plans with 4-inch conduit to serve several work areas, each of which needed multiple Cat 5 cables. The PON design needed only one fiber to replace all that copper, which the design supervisor graphically pointed out on a tour during the building’s construction.

Compare the library PON network to a conventional LAN using copper cabling to the desktop in the photo below from 20 years ago. This equipment below supported less than a quarter as many users on one floor at an insurance company as the PON system in the entire library.

Most PONs are still just gigabit networks, but the standards support 10 gigabits also. In fact, as part of the design, upgrading can be done without interrupting the current PON network since they work on different wavelengths. It’s possible, and maybe even recommended, to leave both networks in place and employ them for different sets of users.