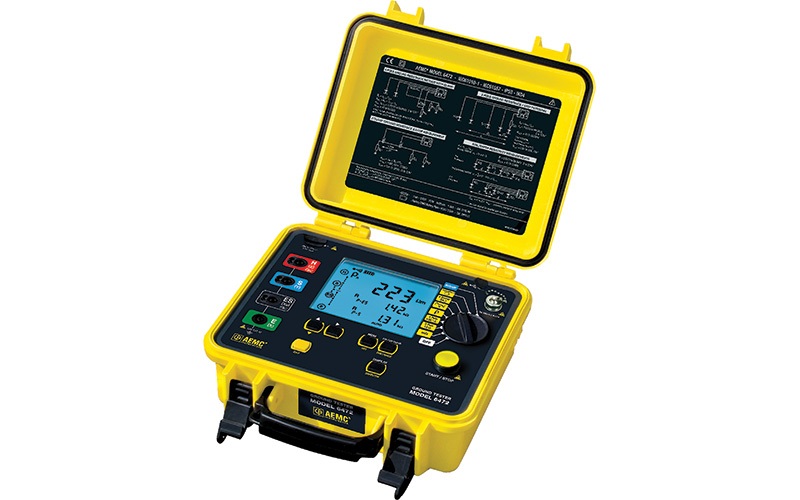 Dedicated grounding testers can document that a system is or is not correctly grounded.

John Olobri, technical advisor at AEMC, Dover, N.H., believes that while there are multifunction testers that include ground tests, one designed to do only ground testing will always do the job better.

“What has occurred is that some of the calculations that were manually performed are now built into the instrument, such as the calculation for the soil resistivity value represented in ohmmeters and the average ground resistance of the measurements taken along with the determination of whether the injector electrode was placed out far enough to obtain proper readings,” he said. “Clamp-on ground testers have added the capability of warning the operator that the reading might be a continuity reading and not a ground resistance reading. Apps now are available for smart devices to run the tests and upload the results to remote sites.”

When evaluating grounding tests, Olobri said to first determine whether a three- or four-pole tester is needed. The amount of test current available in the instrument is important, especially in very dry soils. The more potential the available test current, the more likely the instrument will provide expected results.

“An instrument that detects if live voltages are present is a very good feature. Instruments that allow users to select test frequencies are beneficial when used in electrically noisy environments such as electrical transmission lines or substations,” Olobri said.

It is beneficial to conduct ground testing during preventative maintenance cycles. Over time, bonding connections can become loose or corroded and the ground system itself can erode to the point that it is no longer effective. Periodic testing can detect these conditions before they become costly problems. 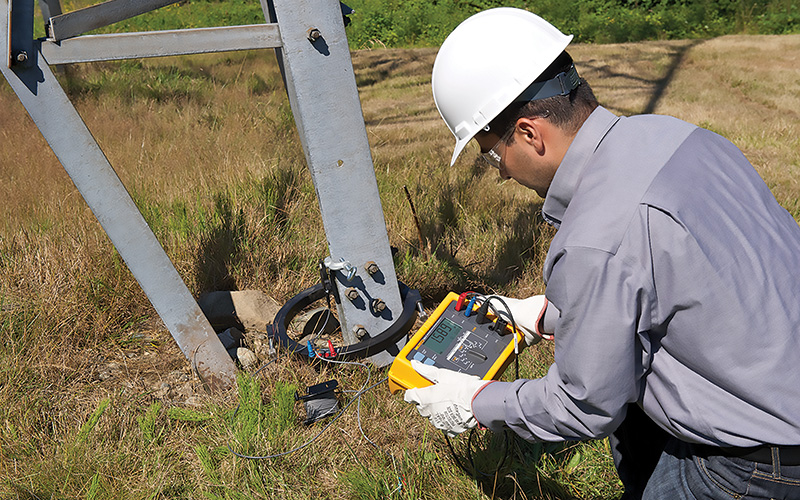 “Based on the NEC, an electrical system ground should be 25 ohms or less. Facilities with sensitive equipment should have 5 ohms or less. A dedicated ground tester would confirm the resistance measurement,” he said.

Silvey said there are four methods of testing grounds:

Soil Resistivity Tests use four stakes when making a measurement. The purpose of this test is to quantify the effectiveness of the earth where a grounding system would be installed. The soil composition, moisture content and temperature will impact the soil resistivity.

Fall of Potential Tests are used to measure the ability of an earth ground system or individual electrode to dissipate energy from a site. This test uses two earth stakes placed in the soil in line with the electrode of interest.

The Selective Test uses the method of the fall of potential, but it is not necessary to disconnect the ground electrode. This test is most common when testing existing ground systems connected and potentially under electrical load. A current clamp is used to isolate the test current injected into the electrodes under test. By isolating the current with the current clamp, the ground resistance can be measured without disconnecting.

Stakeless Tests eliminate the need for temporary ground stakes. Great examples are inside buildings, airports, urban locations and chemical and industrial plants. The temporary ground stakes are replaced with two current clamps. The first generates a voltage on the ground conductor, and the second measures the current flow due to the generated voltage.

“The testers have evolved to digital units and units that select manually or automatically frequency for best measurement,” Silvey said. “Understanding the type of test needed will validate the type of earth ground meter. Some meters will only perform one type of test.”

Typically, according to Silvey, an oil resistivity test would be performed prior to construction to determine the best location for a ground rod or grid. As grounding deteriorates, a selective test would determine if a secondary ground rod would need to be installed and bonded to the existing system. The correct tester required would be an earth ground tester with these test functions.

“Ground testing during routine preventative maintenance is a perfect time to determine if ground resistance is deteriorating. It is estimated that at least 15% of power quality problems are related to grounding issues,” Silvey said.

Jeff Jowett, senior applications engineer at Megger, Dallas, said ground testers have kept pace with and made use of the generic improvements in microprocessor circuitry such as high range, resolution and accuracy.

“Battery technology has reduced and eliminated the concern of limiting the workday to charge capacity,” he said. “Modern testers afford the operator control and selection of basic operational parameters like test frequency, current and noise filtration. Modern testers are also improved in their field capabilities to better withstand rough handling, weather conditions and dirt and moisture ingress.”

Full-function models, he continued, now combine everything into a single unit, three- and four-terminal testing, stakeless clamp-on testing and the ability to separate out the effects of parallel grounds from the one under concern (ART testing).

But most revolutionary, Jowett believes, is the display.

“Full-color active displays give more than just a resistance measurement. They track and trace noise interference to alert the operator to any possibility of noise influence or destabilization as well as provide measures to defeat it. The best test frequency can be automatically selected. Different standard resistivity procedures (Wenner, Schlumberger) can be selected and automatically calculated and displayed,” he said. “And, of course, storage and downloading capabilities are of paramount importance and are constantly being improved and upgraded.”

Jowett suggests rating an instrument by objective standards, such as whether it will function properly in the environment in which it will be used.

A critical decision is the number of tester terminals.

“If soil resistivity tests never are needed, a three-terminal model is good,” Jowett said, “and they are a lot less expensive. But don’t be caught short. If you must, or even may, need to test the soil for its electrical properties, a four-terminal set is necessary.” 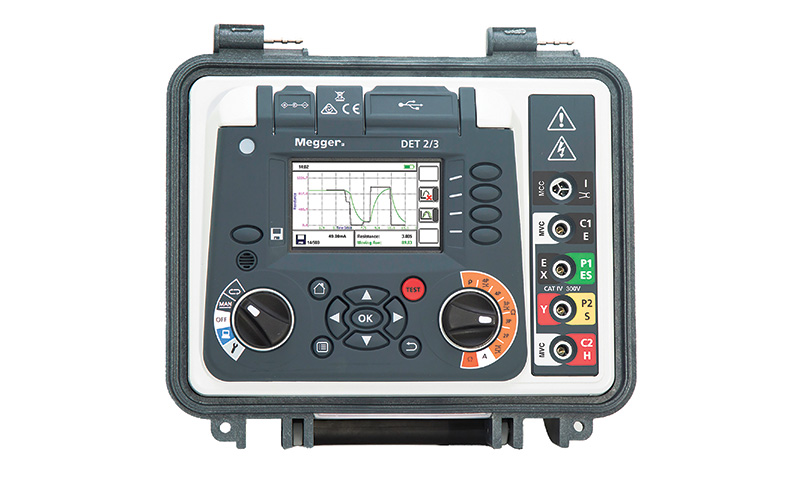 Clamps need also be considered. A single current clamp can identify wasteful and possibly dangerous currents flowing to ground from an unbalanced system. It can also be used for removing the effect of parallel grounds from a measurement. With current and potential clamps, you can perform a separate ground resistance test without stringing long leads. There are separate clamp-on instruments as well. But they cannot be used everywhere, so be familiar with their limitations before purchase.

“Active displays that show changing conditions throughout the time of the test are also useful in gaining the most accurate and reliable results, especially in noisy environments. And of course, be sure that measurement fundamentals like range, accuracy and resolution meet or exceed your expected requirements,” Jowett said.

“Grounding is essential for safety and proper electrical functioning of newer equipment in industrial, commercial and residential sites,” he said. “Electrical installations, plant equipment and other capital assets can be damaged or destroyed from power line electrical surges or damage from lightning events. Grounding rods that aren’t maintained and tested can suffer from hidden corrosion and deterioration over time, leading to much higher resistance and less protection. For businesses, the result can be unplanned downtime, short-term lost productivity and mid-term reduced output as site equipment is restored or replaced.” 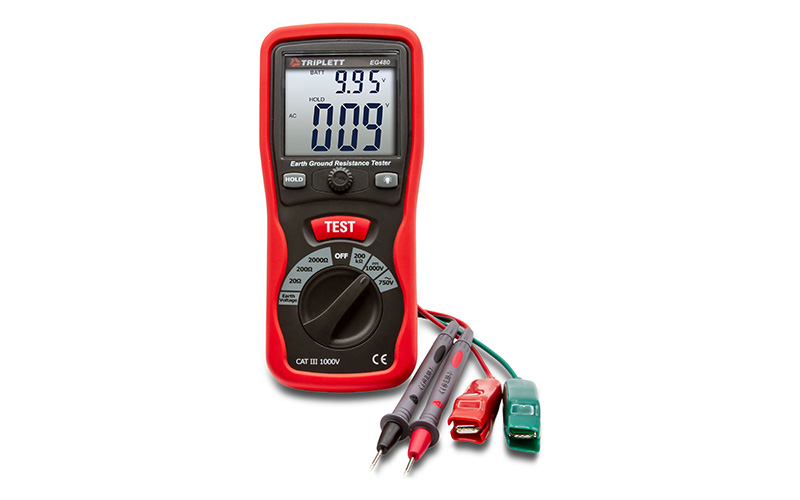 Wexler said while minor evolutionary changes have appeared in grounding testers, the landscape of available testers has changed more dramatically in the past two years.

“Electrical workers today have more choices than ever thanks to online retail, making it easier than ever to point, click, compare and buy,” he said.

Wexler said familiar multimeters typically can measure resistance, but they are designed to measure for much smaller and lower resistance ranges suitable for electrical and electronic equipment, well below the megohm ranges needed for earth ground tests.

“Norms or recommendations for electrical ground testing exist from over a half-dozen standards, electrical and safety bodies. In particular, the International Electrical Testing Association recommends triennial testing of grounds,” he said.

Grounding, he emphasized, absolutely must be a part of site and equipment predictive maintenance.

“Corrosion on ground rods or conductors can be nonexistent in one round and a few short months later because of unusual weather, changes in ambient or soil salinity, or reactive chemical vapors from manufacturing processes, corrosion has significantly increased resistance and reduced the earth ground system’s effectiveness,” Wexler said. “Serious workplace accidents related to improper grounding often involve a bigger cascade of failures where grounding could serve as a stopping point. Neglecting to regularly inspect a site’s grounding system is short-sighted and can remove that layer of protection.”