When The Sun Sets: End-of-Life Planning for Your Solar Panel 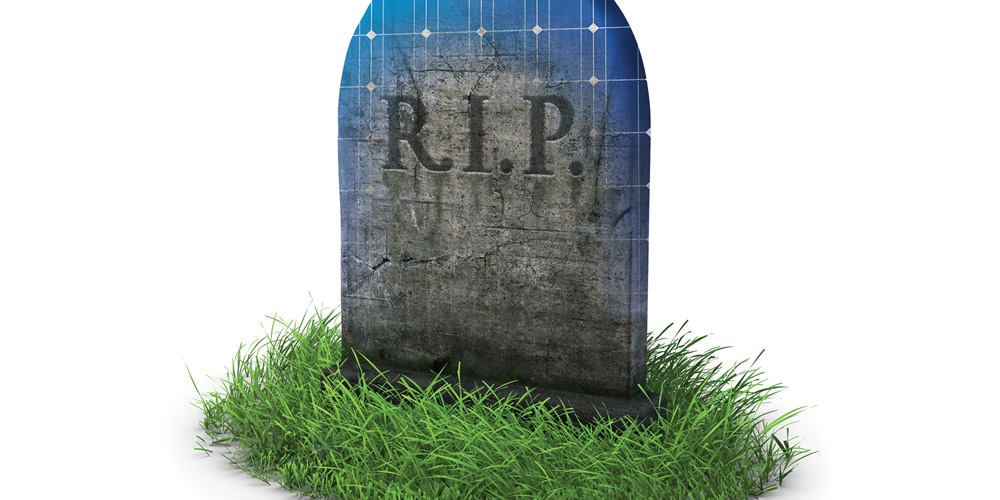 Solar photovoltaic (PV) panels have an impressive lifespan. Manufacturers often estimate it at 25 years, though many units installed in the 1980s are still going strong today. At some point, though, even the hardiest of these panels will fail. And, as they are composed of both valuable precious metals and toxic materials (along with easily recyclable aluminum and glass), the panels will require careful end-of-life handling, an issue the industry is only just beginning to consider.

While this isn’t a critical concern yet, the sheer number of panels now being installed on residential and commercial rooftops and in ground-mounted community- and utility-scale projects suggests that thinking ahead today could prevent a raft of problems over the next several decades. According to the Solar Energy Industries Association, there are more than 1 million operating solar PV installations across the United States, many of which could face failure in the next 20–30 years. Also, that number is growing daily, with GTM Research predicting that 14.5 gigawatts of new PV installations will come online in 2016, a 94 percent increase over 2015’s previously notable performance.

Dustin Mulvaney, associate professor in the Environmental Studies department of San Jose State University, is an expert in PV panel lifecycle assessment who has consulted with the Silicon Valley Toxics Coalition on PV issues. He suggests how we address end-of-life panel handling is important to solar energy’s long-term viability. For one thing, material recycled from decommissioned units could become vital to the supply chain for new products.

“The amount of solar you can deploy is limited by the supply of some of those metals,” he said. “Right now, the thin-film solar industry consumes up to 40 percent of the tellurium supply. Closing the loop helps the long-time viability of the market itself. From that viewpoint, it’s definitely an important issue.”

A report earlier this year from the International Renewable Energy Agency and the PV-power-systems arm of the International Energy Agency estimated the cumulative global PV waste stream could reach 8 million metric tons by 2030. The raw material technically recoverable from those panels could yield a total value of $450 million in 2030 (in 2016 dollars), which is equivalent to the amount of raw materials needed to produce approximately 60 million new panels.

The lack of a formal recycling effort also poses risks of a significant increase in the toxic electronic waste circulating across the globe. In the past, much of this, including everything from flat-screen TVs to desktop-computer circuit boards, has ended up in developing countries, where low-wage workers burn off toxic plastics and use dangerous solvents to recover precious metals over open-pit fires. Mulvaney warns something similar could happen with PV panels in the United States if there are no firm policies prohibiting it.

“I wouldn’t say it’s an urgent issue,” he said. “The industry is relatively small, still. But there is a bit of urgency about setting aside money to pay for this recycling.”

Europe is already doing this work, guided by the European Union’s (EU) Waste Electrical and Electronic Equipment Directive, which requires all producers supplying PV panels to the European market to finance the costs of collecting and recycling those products. PV and battery manufacturers selling into the EU established the PV Cycle program in 2007, under which they jointly fund third-party waste collection and recycling efforts. This effort should provide valuable lessons to U.S. suppliers, given Europe’s leadership in the international PV market, Mulvaney said.

“Europe is where something like 80 percent of all PV panels that have been installed are located,” he said.

Tempe, Ariz.-based manufacturer First Solar is the world’s leading thin-film PV manufacturer and a leader in offering end-of-life recycling services for its domestic customers. Initially, the company offered these at no added cost to its buyers, who are predominantly the developers of utility-scale solar farms. In part, this was a way to ensure its own ongoing supply of tellurium. It shifted to a fee-based system in 2013, but it provides a number of payment options, including ongoing contracts and pay-as-you-go models.

Of course, it’s also important to make panel owners, not just PV manufacturers, aware of the value of panel recycling. This is especially true for owners and operators of large-scale solar facilities that likely see panel replacement as a regular event in their ongoing plant operations.

One large First Solar customer became suddenly aware of the value of recycling when a tornado tore through its installation. The April 2015 event at the 550-megawatt Desert Sunlight Solar Farm near Desert Center, Calif., damaged more than 150,000 thin-film PV modules, and though the glass ended up in a landfill, the modules were recovered, and their precious metals—which otherwise might have had to be treated as toxic waste—were reclaimed for reuse.