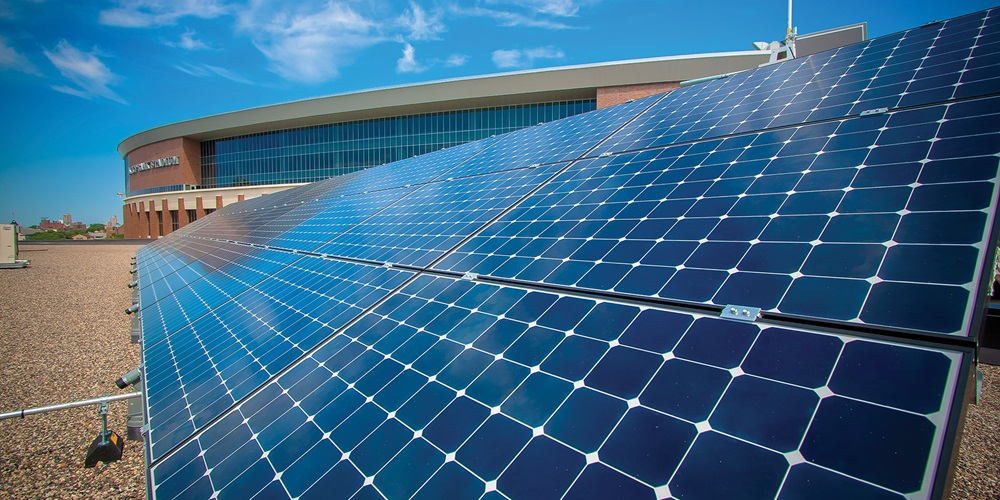 Snowy Midwestern states bordering Canada might not seem like the place to bet on solar, but, in fact, Great Lakes states are aggressively ramping up their use of power from the sun. These states anticipate a sharp increase in solar power in the coming five years. It seems Sunbelt states and the East Coast aren’t the only homes for burgeoning solar-photovoltaic markets.

“When it comes to solar power in the Midwest, it seems everything is happening at once in different forms per state,” said Dan Whitten, vice president of public affairs, Solar Energy Industries Association (SEIA), Washington, D.C. “For instance, Minnesota is the national leader in community solar. In Illinois, the Path to 100 Act (legislation to bring the state to 100% renewable energy) has set goals of 6,500 megawatts (MW) new utility scale solar and 7,500 MW of new residential, commercial and community-scale solar. Michigan is now very active with its utilities in pursuing solar as they craft a regulatory path. Interest in Wisconsin has grown substantially as well. Five years ago, these states had almost no solar. Growth is now exponential.”

In SEIA’s installed-solar figures and state rankings for 2018, Minnesota was ranked 13th with 1,093.76 MW, Michigan 31st with 152.25 MW followed by Illinois at 36th with 108.47 MW and Wisconsin 41st with 66.52 MW. Each state saw solar-power prices drop 47% in the last five years. Three of four expect rankings to noticeably rise as increasingly competitive solar-power rates take hold.

Over the next five years, Illinois is projected to reach 1,636 MW, raising the state to 12th in U.S. solar capacity. Michigan and Wisconsin forecast smaller but significant growth over the same time period. Future activity should bump Michigan up 10 notches to 21st (857 MW). Wisconsin could rise 15 places to 26th (734 MW).

Of the four states, Minnesota is truly leading in solar-power adoption, delivering 1 gigawatt (GW) with estimates adding nearly another 1 GW in five years. In 2018, most of the state’s solar usage was nonresidential. There were 5,216 solar installations. Solar jobs stood at 4,602, and total solar investment in the state came in at $1.65 billion, triple that of the closest-investing state, Illinois, at $312.20 million. Solar jobs in Illinois, however, outranked Minnesota in 2018 at 4,879. Michigan solar jobs ranked about 4,000; Wisconsin has just more than 3,000.

“In 2013, our state passed 2013 Solar Energy Legislation,” he said. “We initially produced about 35 MW. Now we are at 1 GW. In 2024, I see pricing surpassing policy as the biggest driver. Utility demand will propel solar. Our state’s policies are helping to drive down its cost for the future. Price and efficiency will really speed the pace for more solar generation.”

Shaffer added federal incentives such as the production tax credit and investment tax credit are useful and should be extended a little bit longer. PTC is scheduled to wind down this year, and ITC will decrease to 10% in 2022.

“We are getting to price points around the world that will make solar the cheapest form of energy,” he said.

Under Minnesota’s 2013 Solar Energy Legislation, the goal is to generate 10% of the state’s energy from solar by 2030. Shaffer feels his state will surpass that goal. The state has already largely met a 2025 target of 25% of its electricity coming from wind and solar. Minnesota has also set a carbon-free standard as it seeks 100% carbon-free electricity by 2050. The state’s largest electrical utility, Minneapolis-based Xcel Energy, has set the same goal for itself, committing to expand its solar investment and other alternative energy, including nuclear power.

“Each utility that needs to build capacity will be building solar,” Shaffer added.

Other supportive programs include Xcel’s Solar Reward program in which the utility pays residential and business customers that install solar up to $0.08 per kilowatt-hour. The firm also offers net metering where customers retain the renewable energy they produce and can register renewable-energy credits. Customers can in effect “credit back” excess generation onto their bill. This program extends to Wisconsin and Michigan. Other Minnesota utilities offer their own incentive programs too.

“Solar works is a generally accepted viewpoint here,” Shaffer said. “We’ve evolved in five years from solar ‘yes or no’ to ‘yes but how.’ Is it a solar farm on a brownfield, in a farmer’s field, on a rooftop, through energy storage, from a utility?”

He also sees his region’s climate as an advantage.

“Solar panels actually work better in colder climates. In Arizona, there is great solar capacity, but the productivity isn’t as much as you think, as PV panel efficiency isn’t quite as good. So, when looking at a cooler climate and solar, just look at Germany. They have tons of solar. We are at the same [latitude location] hemisphere,” he said.

The use of trackers also plays a bigger role. Motorized PV panels track the sun capturing as much of its energy for as long as possible during the day.

Hunt Electric, Bloomington, Minn., cut its teeth on solar in 2009-2010 when it took on some projects for out-of-state clients in the West. Hunt’s solar specialist David Fries said that of his firm’s portfolio of 270 MW of solar to date, 200 MW were installed in the last two years. The firm was involved in many of Minnesota’s first solar projects. Since about 2016, Hunt has averaged 200-plus IBEW-trained solar installers in the field to accommodate the growth of Minnesota’s solar industry.

“We are national firm performing work outside the state, but our solar division has stayed pretty much Minnesota-focused,” Fries said. “Minnesota’s legislative support has made our state very solar-friendly. Utilities have made a commitment to renewable energy and see the cost-benefit dynamics with solar. We see ourselves busy in solar for years to come.”

With additional offices in Duluth and Rochester, Hunt covers much of the state. “We have solar customers that pay a utility rate (power bill) ranging from 0.04-cents up to 0.15 cents per kilowatt-hour,” Fries said.

Shaffer explained that, while solar is incentivized in many parts of the state, it is also de-incentivized in certain areas. For instance, if nuclear power is the regional power source, its electric rates might better solar. Location can determine solar’s fit and fortune.

Xcel’s community solar gardens (CSG) program and MnSEIA have been instrumental to the state’s leadership status. This year, Minnesota expects to have installed 200 MW of community solar with a yield closer to 700 MW, a fruition from applications filed in 2015. MnSEIA reports that when CSG took off in 2016, solar-energy jobs in the state doubled making “solar installer” the fastest growing job in Minnesota.

Community solar, while popular, brings its own a unique set of rules.

“There is a give and take with policy and cost,” Shaffer said. “One of the rules of community solar is if you acquire power from a solar garden, you must live in the region where the garden is located. To build these gardens, you need to find the land and space which is most often outside the metro region that wants to benefit. So, your garden is located rurally. The garden may be financed by a developer or other financing entity.”

Beyond Xcel, Minnesota Power and Otter Tail Power are examples of other utilities involved in community or public solar. A rare urban-located community solar project is being planned for downtown Minneapolis to be located next to the Target Center, Minneapolis’ multipurpose sports arena.

Cost may be king with solar, but it’s a little more nuanced when Hunt works with solar-interested clients.

“Solar is viewed as a financial investment,” Fries said. “Performance and reliability, project design is all part of the equation. A whole lot more than price goes into it. We recognize that especially when we specify components. We have also fine-tuned our solar expertise from master electricians on down. That’s important to our customers. Our preconstruction team hold North American Board of Certified Energy Practitioners Certified Installer and Technical Sales certifications. We work with manufacturers to be understand their solar-related products.”

“We also hold additional solar training including related software acclimation. Our prefab construction helps in the planning and on-site installation of solar. Being nimble helps on everything from turn key to design-build, including solar system design and modeling, feasibility studies, and maintenance and service.”

“I see solar representing as much as 40% of our state’s carbon-free standard, but a lot of things must happen to get us there,” Shaffer added. “Electric vehicles must take hold, as must smart homes and smart cities too. The more you electrify, the more space for solar.”