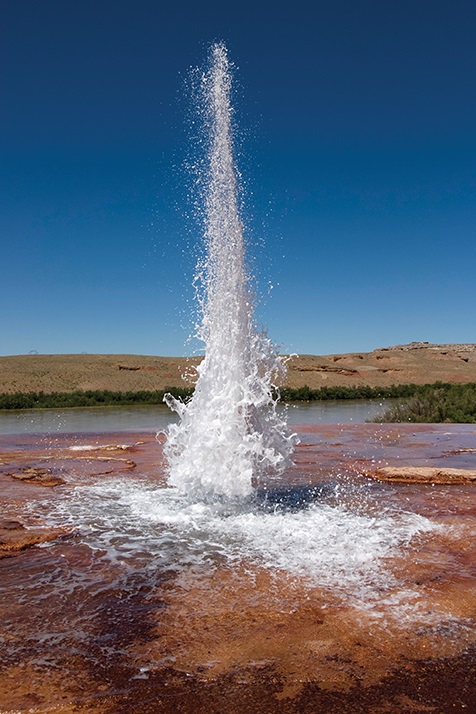 Imagine an energy source buried thousands of feet below us that can best be accessed by sending highly pressurized fluid to open fissures in underground rock. While hydraulically fractured—or “fracked”—natural gas might be the first example that comes to mind, in this case, the source is actually heat emanating from the Earth’s core. This carbon-free geothermal energy is attracting growing attention as a power source that is both steady and renewable, especially as new technology shows promise in expanding its availability.

Tapping the Earth’s heat for electricity production is nothing new, especially in locations where it comes close to the surface in the form of steam or hot water. Iceland is almost 100 percent powered by geothermal energy. California is home to the world’s largest geothermal plant, called the Geysers, with a capacity rated at approximately 700 megawatts (MW). In the past, these plants comprised a closed-loop piping system to tap into extremely hot fluids or steam to drive a standard-issue steam turbine generator. However, there just haven’t been many locations where hot fluids were close enough to the surface to make the resulting electricity economically feasible. Today, though, resource availability may be expanding, thanks to lessons learned from the oil and gas industry.

“Using technology to manipulate production,” is how Karl Gawell, executive director of the Geothermal Energy Association, describes what oil and gas companies are teaching geothermal developers. Fracking frees access to previously hidden fossil-fuel deposits, and geothermal developers are using the process to create more exposed surface area across hot rock surfaces thousands of feet below the surface. They are now injecting water into these areas and extracting the resulting steam to power turbines.

These projects, called “enhanced geothermal systems” (EGS), are primarily demonstration efforts, for now, at sites in France, Germany and Switzerland. The German and Swiss installations have raised concerns because of seismic activity believed to have been stimulated by related drilling. Similar concerns have resulted in U.S. regulations that require seismic monitoring and reporting, along with outside technical review of all project proposals.

The first U.S. project with these requirements in place is the Newberry Volcano site some 20 miles outside Bend, Ore., where AltaRock Energy is well into development of an initial 10-MW plant that is the star of the U.S. Energy Department’s EGS research-support portfolio. In 2010, AltaRock received a $21.8 million grant for the effort, and it has developed a patented process for creating multiple fissure zones from a single wellbore, making individual wells more productive and cutting the cost of the resulting electricity.

Enthusiasm for EGS projects such as AltaRock arose from a 2006 report by an 18-member panel led by researchers from the Massachusetts Institute of Technology (MIT). In “The Future of Geothermal Energy,” they stated that a “reasonable” research and development investment could enable up to 100 gigawatts (GW) of EGS-produced electricity to be developed in the United States within 50 years. The researchers looked beyond the potential of traditional hydrothermal resources, such as the Geysers plant, to areas where hot rock—­without accompanying steam or water—lay within drilling range. Their results have become a touchstone for today’s geothermal enthusiasts.

“The MIT study was extremely important for the advancement of EGS,” said AltaRock spokesman David Stowe. “It showed the tremendous potential for the technology to meet our energy needs.”

That potential is being further explored through DOE-supported research into the ways geothermal developers can apply mapping techniques used by oil and natural gas companies to identify potential subsurface resources. In August, the DOE announced grants totaling $4 million to support 11 efforts focused on such “play fairway analysis” research, with the goal of developing regional, basin-scale maps that could help improve the success of exploration drilling.

Beyond technical challenges, EGS projects also have faced some community opposition based both on the real potential for seismic activity and the technology’s perceived relationship to fracking.

“The opposition folks call EGS ‘geothermal fracking,’ which is a complete mischaracterization of the process,” Stowe said. He added that, while AltaRock has successfully allayed concerns of residents around its Newberry project, “it remains a problem in other areas.”

Gawell has seen different challenges, from his position directing a national organization with strong ties to international geothermal activities.

“Frankly, one of the most difficult issues we face is competing land use,” he said, noting that geothermal resources often are located in well-loved wilderness areas. However, geothermal plants are significantly smaller than other renewable-energy installations; geothermal has compact workings that are largely underground.

“It’s the smallest footprint of any of the renewable technologies,” he said, adding that this “usually works to our advantage.”