The New Color of Money 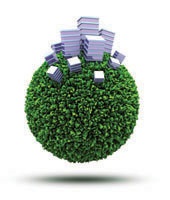 Founded in 1890 in Walla Walla, Wash., Banner Bank is a subsidiary of the $4.3 billion bank holding company, Banner Corp. The company began expanding its services throughout the Pacific Northwest in the 1960s and now operates 84 full-service branches and 12 loan offices in 29 counties in Washington, Oregon and Idaho, including the recently completed Banner Bank Building in Boise, Idaho.

Started in April 2006 and completed in March just a year later, the $25 million, 11-story, 190,000-square-foot Art Deco-style steel building, with a concrete core, precast skin and raised floor, houses Banner Bank operations on the first two floors, with the rest of the building leased to a variety of commercial tenants by the owner and developer Christensen Corp. But none of that is what makes this building unique. What sets it apart is that it is one of few office buildings in the world to receive the Leadership in Energy and Environmental Design (LEED) platinum rating from the U.S. Green Building Council (USGBC).

From the outset, Christensen and the architectural firm responsible for the overall design, HDR Inc., knew attaining a LEED certification would provide a credible, effective framework for developing a high-performance building with a high return on investment. The team originally targeted a LEED silver rating, but quickly discovered a platinum rating was within reach with no discernible added costs.

Romar Electric Inc., Boise, had years of experience on high-rise construction, including working with Christensen to resolve design issues on another project. Joining the LEED design team, the company served as electrical engineer during the design phase and then performed the installations of the electrical power, lighting, fire alarm and data systems.

“All of the companies on this project have worked together before and the team’s goal was to be as innovative as possible in order to gain LEED’s platinum certification and still stay within a traditional construction budget,” said Wes Smith, co-owner of Romar Electric and project manager for this project.

All systems are ‘green’

The main power for the building is distributed through three separate bus ducts, according to foreman Joel Smith. Oversized bus ducts were chosen for the job to reduce resistance as much as possible. This increases efficiency by reducing power losses in the wiring. From the ducts, power is distributed to sub- and emergency-panels on every floor for power outlets, lighting and backup power. In addition, in order to comply with LEED requirements, Romar Electric installed meters on the lighting, mechanical system and receptacle power branches of the main distribution system.

“This way, each system can be separately monitored for detailed feedback to determine usage and energy efficiency,” Joel Smith said.

Romar Electric designed the lighting system to require only two circuits per floor for all the fixtures. Lighting control is accomplished through low-voltage Encilium (Ontario, Canada) digital module controls. Wes Smith and Christensen researched a number of options before choosing this energy-saving, Web-based lighting control system.

Users control the lighting in their area through the Internet, so there are no lighting switches in the building, with the exception of the conference rooms. The system also is programmable, allowing users to give long-term instructions for lighting control. The estimated energy savings for the building through this system is 40 percent. And because lights are digitally controlled, each fixture requires less amperage to operate and less wiring to install.

“All of the fixtures are dimmable, and the high-efficiency indirect lighting from them achieves 0.7 watts per square foot, a significant savings,” said Dan Wright, the project’s general foreman.

The emergency power system is based on a generator and control system capable of handling all of the building’s 120-volt loads.

“The design of the electrical and backup power systems required working closely with the mechanical contractor and architect to fulfill the project’s sustainable design needs,” Smith said.

The other two systems Romar Electric was responsible for, although important, were not affected by the need to fulfill LEED requirements. The fire alarm system consists of smoke detectors, duct detectors, pull stations, speaker strobes, and monitoring systems for sprinklers, air handling units, fire pumps, elevators and reservoir. A main control panel, communication jacks for firefighter use and an annunciator are installed at the main entrance.

Data and voice communications are accessed through a voice over Internet protocol (VoIP) system using a fiber optic backbone that branches into four modular hubs on each floor for easy adaptation by future tenants on upper floors.

Challenged by the greenback

A major challenge for Romar Electric was maintaining the budget while developing a design that used new products, methods and materials for the company.

“We maintained the budget by seeking out the proper materials and systems that would qualify for LEED certification, and by performing in-depth research that looked beyond traditional methods and manufacturers, and by being willing to examine suppliers and design ideas that we had not had much exposure to previously,” Wright said.

Exposure to new products, methods and systems went beyond the design team. It affected the field electricians as well. The on-site electricians were using, perhaps for the first time, nontraditional installation methods and had to learn how to comply with recycling and other LEED requirements.

“Through our foremen’s leadership, we developed guidelines for the field electricians to reference concerning materials, recycling, installation and waste reduction,” Wes Smith said.

As the team got used to working under LEED requirements, it became easier to manage the project and to determine what was required to ensure its success.

The most valuable lesson Romar Electric learned, according to Wes Smith, was that a successful LEED project requires close management and communication. This lesson has enabled the company to further improve the services it provides. Since the project was completed, to further demonstrate the company’s ability to deliver a LEED certified project, Romar Electric now has two LEED-accredited professionals on staff.

Water efficiency requirements for a LEED platinum rating were achieved through the use of drought-tolerant vegetation and automated irrigation controlled by moisture sensors, which reduces potable water demand by more than 30 percent, and by the use of state-of-the-art water conserving fixtures, sensors and mechanical equipment. Energy requirements for heating and cooling were met through the use of geothermal heating and a unique heating, ventilating and air conditioning system that delivers air to multiple point-of-use locations throughout each office.

In addition, more than 75 percent of all construction waste was separated, collected and picked up at the job site for recycling. Supplies were purchased from local distributors to reduce fossil fuel consumption from transporting materials and more than 40 percent of the materials used to construct the building had recycled content. All indoor finish materials have low or zero volatile organic compounds content, daylight harvesting was used to reduce power consumption, biodiesel fuel is used for the backup generator, and a comprehensive set of guidelines was created to help tenants become partners in sustainability.

According to Christensen, by using the LEED rating system as a central organizational tool, this building demonstrates that environmental design provides greater comfort to occupants while offering enhanced value to the building owner.

“The cost of the building was average, allowing us to offer lease rates competitive with buildings in the downtown area that are 20 to 30 years old,” he said.

The Banner Bank Building was Romar Electric’s first LEED project and, according to Wes Smith, has changed the company.

“We now realize that dealing with issues, such as waste and recycling, are not only good for the environment, but are also profitable. We can offer green building construction to our clients without any impact to either our or their bottom lines,” Wes Smith said.