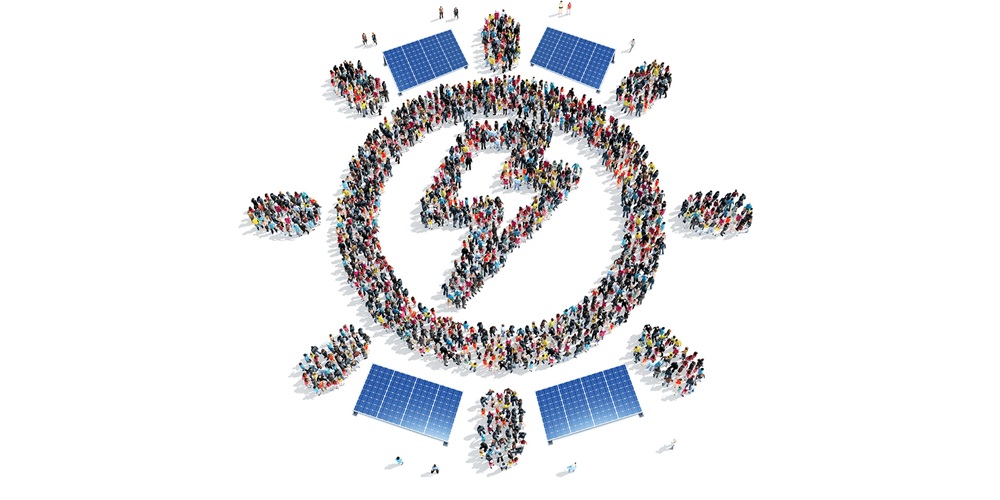 Rooftop solar panels can be a great deal for those with the available roof space and funds for installation. But this option for reducing the electricity bill and related greenhouse gas emissions just isn’t available to many, if not most, in the United States, including renters. That fact has sparked the development of community solar, which can provide the financial and climate benefits of rooftop arrays without the need for on-site panels—and, increasingly, expands options for those with low incomes.

However, like many developers of other forms of distributed renewable energy, companies attempting to develop community solar projects are currently facing interconnection challenges. Researchers at the Lawrence Berkeley National Laboratory recently estimated 680 gigawatts (GW) of zero-carbon energy projects are now sitting in interconnection queues. While most of that capacity is related to larger, utility-scale projects, community solar installations are certainly held up as well. Utilities in the most community-solar-friendly states say they’re doing the best they can to keep up with demand, while advocates say those same companies are moving too slowly to accommodate what some of them might see as competition.

Community solar—which might also be called shared solar, community distributed generation, solar gardens or roofless solar—can take several forms, depending on the state. Most often, though, a developer signs a long-term lease agreement with a property owner for a site on which solar panels will be installed. State regulations on size vary, but most limit it to under 5 megawatts (MW). An attractive location for such an array could be farmland in a rural community or rooftop space on an expansive warehouse or data center.

“Typically, for the landowners, it’s a sign-and-drive,” said Patrick Corr, chief strategy officer with Empower Energies, a developer and investor in commercial-scale solar projects, including community solar efforts. “They’ll receive a nominal payment to secure the land while the developer completes the required diligence.”

Once the project is approved, Corr said, the developer will begin the effort to get buyers for the electricity its solar panels will eventually generate. Participants might pay an upfront fee, sign up for a leasing agreement or subscribe for a certain number of kilowatt-hours per month at a lower energy rate than their utility charges. In some cases, participants might even own specific panels in the array and get credited for those panels’ production. These days, most developers are turning to outside companies to enroll new customers, regardless of how a project is being structured.

“Subscribers are increasingly handled by companies that specialize in acquiring and managing them,” Corr said, noting a more recent emphasis on widening community solar’s subscriber base beyond those able to make a significant upfront payment in return for savings that accrue over time. “This is a specialty, and the financiers are often more comfortable knowing that their subscriber base is managed by an organization that does this extensively and can deliver on all required subscriber types, such as low- and moderate-income [households].”

Developers and their investors can earn their own profits through various means, depending on state regulations. In Massachusetts, for example, they might get a small payment for each kilowatt-hour that makes it onto a distribution grid. Utilities also can benefit, as they can use the renewable-energy credits generated by the project to help meet any required targets for renewable-energy production in their state.

How big is it?

The concept of community solar has grown rapidly in less than a decade. In a July 2021 report, analysts at energy research firm Wood Mackenzie found this approach accounted for 37% of 2020’s annual, nonresidential solar capacity, up from just 13% in 2016. This is impressive, considering the 37% figure also includes utility-scale projects that can be much larger. At a U.S. Department of Energy event in January, members of the developers’ group Coalition for Community Solar Access committed to build an additional 20 GW of community-based capacity by 2025.

Among the newer developments in community solar is a growing push for provisions to ensure low- and moderate-income electricity customers know about these opportunities and are encouraged to participate. Because the electricity generated by a community solar array can be credited against participants’ own energy consumption, their monthly bills can be notably lower—certainly a boon for those whose finances are already stretched. Plus, because households in these income brackets are more likely to be renters, they can lose out on the chance to install their own rooftop solar panels. A community approach means more of the electricity they use will come from renewable sources.

The growing demand is coming as the industry is facing headwinds in the related areas of siting and electric utility interconnections. Developers can face state regulators’ requirements that a projects’ customers be in the same county as the new array, or at least in an adjacent county. This is to ensure the electricity is feeding into grid systems as close as possible to where its subscribers live. A need to be near existing utility infrastructure also complicates siting decisions.

“There are a lot of different factors—availability of land, cost of the land, access to interconnections and local permitting and zoning,” said Jeremy McDiarmid, vice president of policy and government affairs for the Northeast Clean Energy Council, which advocates for renewable-energy businesses in New England and New York state. “It’s a puzzle to align all of the various elements that go into a successful site. The cumulative cost is the most important thing—the cost of the land itself, and the cost of the interconnection process.”

The interconnection, of course, is the point where panel-generated electricity enters the grid, and the complexity grows along with project size, according to McDiarmid.

It’s not surprising that the states that have been the most successful so far in community-solar development are now also facing the biggest impediments to new projects. In essence, earlier market entrants had much more to choose from, in terms of locations where customer base, land availability and easy interconnection access all lined up. Those later to the industry now can face challenges in all three aspects, but interconnection roadblocks are especially frustrating because they can lead to budget-busting utility fees that aren’t always known at the outset.

When projects are proposed, utilities must perform grid studies in those areas to determine whether they have line capacity for the added power and what equipment might be needed. Those studies help determine just how costly interconnection will be. Developers can face additional costs when utilities are slow to complete their interconnection studies, creating expensive delays to project timelines that also can complicate financing, especially when outside investors are involved. Utilities, facing growing numbers of proposals for adding distributed energy resources to their distribution grids, often claim their staff is simply overwhelmed. Developers, especially in regulated states where utilities also own generation plants, can see such delays as a way for utility companies to limit competition.

Such a situation came to a head in Minnesota in January, when the state’s Public Utilities Commission fined provider Xcel Energy $1 million for not living up to a quality-of-service plan it agreed to in 2019. In addition to the fine, the utility also must regularly report how well it is proceeding with interconnection timelines and on any disputes or complaints and how the utility is addressing them.

Additionally, solar companies face the hurdle of paying for any upgrades an interconnection study might identify. Current federal guidelines under the 1978 Public Utility Regulatory Policies Act state that the first new project on a line to force line upgrades is responsible for paying for those upgrades. Subsequent developers can take advantage of the added capacity those improvements enable without bearing any of the related financial burden. Grid improvements to enable greater adoption of renewables within distribution systems are most needed in areas with aging grids and where solar is already plentiful. McDiarmid said heavily populated southern New England, which includes Rhode Island and southeastern Massachusetts, is such a region.

“There are many more land constraints in southern New England than in most other parts of the country,” he said, noting that the demand for system improvement is becoming critical. “It’s desperately needed—the need to upgrade the grid and build for the future has never been more acute.”

McDiarmid’s organization is one of many now arguing that utilities need to take a more proactive approach to planning for community solar and other generation options within their distribution systems. He points to efforts by the Massachusetts Department of Public Utilities, which has engaged utilities in that state in a pilot program to conduct interconnection studies for several proposals already in their queue, as a group, rather than one at a time. This approach could identify system upgrades that could be shared across multiple developments and their customers.

“I think we need to recognize there’s a societal value in a clean-energy future,” McDiarmid said. “The development community isn’t the only stakeholder who should share some of the financial responsibility for building a grid for the 21st century.”