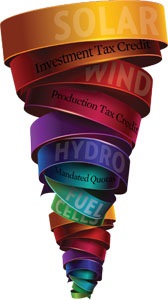 For years, the United States has been looking for ways to end its addiction to fossil fuels and create a greener, cleaner and safer environment. From politicians to homeowners, the appeal of renewable energies has continued to hold sway, while more companies are opting to power their operations with clean technologies that offer real and significant cost savings.

Here we examine the past, present and future of four major clean technologies—solar, wind, hydro and fuel cells—and the opportunities they present to electrical contractors (ECs).

The solar revolution
In 2000, Clean Edge, a research and advisory firm devoted to the clean-technology industry, projected that global solar power would grow from $2.5 billion to $23.5 billion by 2010. At the time, cost and financing obstacles made it difficult for the industry to move forward. However, according to Monique Hanis, director of communications for the Solar Energy Industries Association, solar began to come of age with the passage of the federal solar investment tax credit (ITC) in 2005.

“The ITC is a 30 percent reduction in the overall tax liability for individuals or businesses that invest in solar-energy systems,” she said.

The ITC enabled the solar industry to surpass early predictions, and by 2010, the photovoltaic (PV) market expanded from that $2.5 billion in 2000 to $71.2 billion, representing a compound annual growth rate (CAGR) of 39.3 percent, according to Clean Edge.

James Washburn, product manager for renewable-energy products for Siemens Infrastructure and Cities, Alpharetta, Ga., said that the largest market drivers have been financial incentives and the desire to go green. Government and utility requirements, plus tax and other financial incentives, have been a huge boost to overcoming the high initial costs of installing solar energy systems. But the economic power of such incentives will fade over the next decade as system costs and associated expenses fall and technological performance and operational efficiencies rise.

The major market barrier to solar energy has always been system and implementation costs.

“With a typical payback extending to 10 years or more, consumers are faced with a long commitment to recoup their investment,” Washburn said.

However, this barrier is falling as system prices lower and the price of utility-generated power climbs.

“In some regions of the country, grid parity has already been reached, that is, the point at which it is equally cost-effective to produce solar power as it is to buy power from the utility,” he said.

With modules offering almost twice the output of their predecessors at lower installation costs and technical advancements, such as microinverters, that optimize module and system performance, there will be increased opportunities for ECs.

“I believe residential solar will boom in the next decade as installation costs continue to fall, utility prices continue to rise and consumers become increasingly conscious of their energy consumption and look for economically sound alternatives,” Washburn said.

In a speech at the 2012 National Electricity Forum, Energy Secretary Stephen Chu said that the Department of Energy (DOE) expects solar PV modules to drop significantly more in price in the next four years and become as cheap as gas, wind and coal.

The answer is blowin’ in the wind
Near the beginning of this century, everyone expected wind and other renewable energies to grow and the cost to come down. According to Matt Guyette, renewables strategy leader for GE Wind and Solar, Atlanta, no one expected what actually happened.

For example, 10 years ago, wind energy was being installed at a rate of 7 gigawatts (GW) per year, with five-year forecasts predicting incremental growth to 9, 10 maybe even 12 GW per year.

According to Clean Tech, the global market for wind power has expanded from $4.5 billion in 2000 to more than $60.5 billion today, representing a CAGR of 29.7 percent.

However, improved turbine technology forced the cost per gigawatt down and really drove growth over the first decade of the 21st century.

In all, the cost of wind energy has fallen 65 percent in 10 years, a decrease that was not at all forecast.

“Most in the industry thought that the cost would decrease by as much as 35 percent over the decade, but now wind can globally compete with fossil fuel on a kilowatt-per-hour basis,” Guyette said.

In the United States, however, wind power declined after record growth in 2009, adding only half as much capacity as the prior year, and just 5 GW was installed in 2010, according to Clean Tech.

U.S. energy policy was the first market barrier to wind energy, according to Guyette; in the early 2000s, the production tax credit (PTC) was not always applied.

“When the PTC became stabilized, the market grew dramatically. The PTC is coming to expiration again in 2012, and the other two times it was not extended, the market dropped 75 to 90 percent,” Guyette said.
Other former market barriers that may have caused the drop included technology that was not ready to be advanced a decade ago, reliability, transmission availability and permitting.

Because the kilowatt-per-hour cost has come down and turbine performance and control technology has improved, there could be more global acceptance of wind energy in the future, meaning better opportunities for ECs.

“For electrical contractors in the U.S. going forward, wind energy represents a huge base that needs their expertise to install the turbines as they are deployed and to maintain them over their lifetime,” Guyette said.

So what about the other types of alternative generation?

Rollin’ on a river
Ten years ago, predictions were that Asia would expand its hydroelectric capabilities significantly, according to Norm Bishop, P.E., senior vice president of hydroelectric and renewable energy for Knight Piésold and Co., Denver.

“With the Three Gorges facility coming online, in conjunction with other large projects, the forecasts for China have been exceeded,” he said.

India, Pakistan and Indonesia also are focusing on developing their hydro capacities. In the United States, the predictions made in 2000 were that the market would consist primarily of upgrade projects and repowering existing electric stations.

“That is basically what has been happening,” Bishop said.

Incentives such as the ITC and PTC, as well as mandated renewable-energy quotas, have driven hydroelectric companies to add power facilities at existing dams. An important market barrier, however, is the price of natural gas.

“It’s so inexpensive that utilities do not have an incentive to add hydro to their portfolio,” Bishop said.

Opportunities for ECs are significant in terms of design and construction for small and multiple hydro projects. Although market predictions vary widely, Bishop believes the industry will experience a growth rate of 1,000 megawatts spread out over the whole country over the next decade.

“Electrical contractors have the opportunity to take advantage of the installation work associated with these projects,” he said.

Hydroelectric power generation is performed at dams and hydrokinetic technology takes advantage of waves, tides and currents to produce energy. Ten years ago, the prediction was that, with investments in domestic technology companies build the machines that harvest the waves and tides, and with funding more accurate studies, the market would mature.

“Getting demonstration projects in the water took longer than anticipated, as is typical, but there are several now. The next step is to convert them into commercial-scale projects that produce electricity for use,” said Bill Staby, founder and CEO of Resolute Marine Energy Inc., Boston.
Driving the hydrokinetic market forward is a strong interest in integrating more renewables into the electricity-generation mix.

“Hydrokinetic technology, however, cannot yet demonstrate its cost effectiveness and confronts various regulatory issues, including environmental permitting and the creation of a level playing field for all renewable technologies,” he said.
According to a January 2012 report from the DOE, water power, including hydrokinetic resources, can potentially provide 15 percent of the country’s electricity by 2030. Sean O’Neill, president of the Ocean Renewable Energy Coalition, Darnestown, Md., sees this market as a tremendous opportunity for ECs.

“The electricity generated by hydrokinetic technology needs to be brought ashore and put into stations, transformers and distributed to customers,” he said.

Feelin’ the Electrochemistry
In the early 2000s, there was both much hope and hype in the fuel cell industry, leading to predictions that fuel cells would be in commercial cars in five years, they would be used in homes, and they would provide a highly reliable, clean power solution that would be used in many customer markets. Fairly quickly, the industry realized that fuel cells were going to take longer to develop than initially anticipated according to Sandra Saathoff, director of marketing communications for ReliOn Inc., Spokane, Wash.

“Over the last 10 years, the fuel cell market has still grown fairly steadily via increased rollouts in current markets and introductions into new markets,” she said.

A number of market drivers include communications networks maintenance for emergency responders and to improve security, the need to improve power reliability as evidenced by recent natural disasters, a focus on environmental sustainability that has led network operators to explore alternatives to batteries and combustion generators, and developing countries’ need for reliable quality power to sustain economic growth. And, although market barriers have been few in number, they’ve been significant in impact, Saathoff said. Barriers include comfort with the status quo, hydrogen education and availability and cost.

“Initial capital cost for fuel cells has been higher than for existing technologies, but, as the products have matured, costs have decreased significantly. Depending on the application, the cost of a fuel cell solution may be less,” Saathoff said.

In the coming decade, fuel cells should continue to prove themselves as a highly reliable, environmentally sustainable, cost-effective solution, and their use in customer markets will increase accordingly. Saathoff said several major auto manufacturers project fuel cell cars being rolled out in the 2014–2015 time frame; there are test fleets on the ground already.

“Fuel cells and other [alternative] energy solutions will continue to demand the skills and involvement of electrical contractors,” she said.

All or any of these renewable energies benefit creative contractors while providing ongoing electrical work that is fundamental to implementing, deploying and advancing technology.