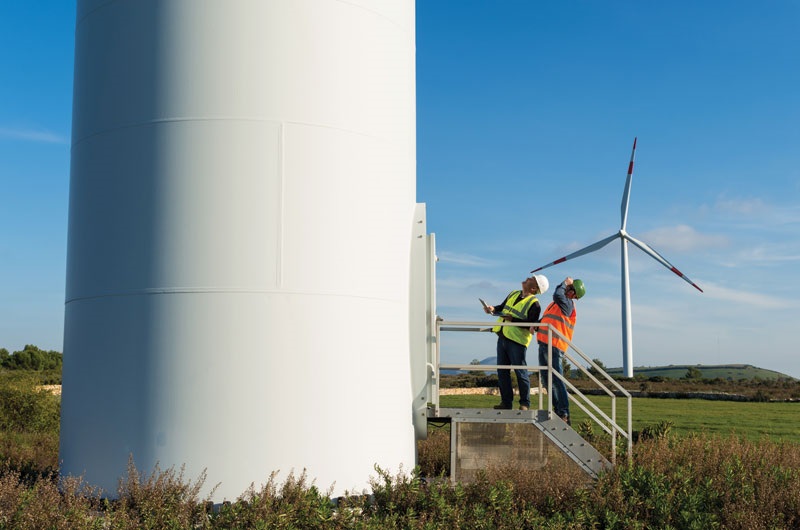 President Trump’s Campaign pledge to bring jobs back to coal mines could be holding former coal workers back from another energy sector that is booming and predicted to maintain a strong growth curve for at least another decade. That sector is wind generation.

Employment in the wind industry overall—including turbine manufacturing, site engineering, construction and maintenance services—topped 100,000 last year, according to U.S. Department of Energy (DOE) figures. Even more impressive, the DOE sees the possibility of 380,000 jobs by 2030.

The U.S. Bureau of Labor Statistics (BLS) predicts wind turbine service technician will be the fastest growing job in the United States between 2014 and 2024. The BLS’s projected growth rate of 108 percent over a decade represents a relatively small number of actual jobs (4,400 in 2014 to 9,200 in 2024), but current demand is so high that graduates from two-year training programs are seeing multiple job offers with starting annual salaries ranging from $50,000–90,000, according to Daniel Lutat, director of the Sustainable Energy Resources and Technologies program at Iowa Lakes Community College, Estherville, Iowa.

Lutat said the main reason for this growth is the federal incentive program that was renewed in 2015 and applicable to turbine installations that will begin construction by the end of 2019. While previous versions of the production tax credit (PTC) faced regular battles for renewal, the 2015 renewal established a stable market and a planned phase-out that has eased developers’ long-term planning efforts.

“That kind of changed the name of the game entirely,” Lutat said.

Wind-farm development has boomed since the PTC’s renewal. According to the American Wind Energy Association, more than 8,200 megawatts of wind capacity were created in 2016. That is a $13.8 billion investment in total, of which $10.5 billion went to projects in low-income counties. These new turbines require ongoing maintenance to operate at peak performance, which is leading, in turn, to the rapid growth in employment opportunities for aspiring wind techs.

Training programs such as the one at Iowa Lakes Community College generally run two years and include academic and practical-application coursework, such as getting familiar with working at heights and the safety requirements related to high-voltage operations. Admissions offices are looking for students that are either ready to enroll in, or have completed, an intermediate-level algebra class. Students also need to prepare themselves for a demanding educational experience that could lead to a broad range of career opportunities.

“These students do have a goal when they get here,” said Doug Zemler, electrical technology program coordinator at the Iowa Lakes program. “You’ve got to be able to work at heights and to work with high voltage. Individuals who go to school here want these jobs.”

Lutat sees opportunities for women in the field, noting his program’s current highest-earning graduate is a female traveling field technician.

“[The industry is] starving for their brain power,” he said.

Most of today’s training programs are located in wind-rich states across the Upper Midwest and Texas. Because community colleges generally offer these programs, training there is a more affordable option than a standard four-year degree program. In a recent interview on the NPR program “Here & Now,” Lutat said Iowa Lakes’ tuition, room and board would total $21,000 for the full two-year program before applying any scholarships. In addition, earnings from available paid internships between the program’s first and second years can sufficiently cover the full tuition bill in some cases.

Program graduates are working in a range of positions throughout the wind industry and not just in the field.

“We’ve got them in turbine manufacturers, we’ve got them with third-party service providers, and the aftermarket is a big deal now, too,” Zemler said.

With demand for skilled wind-energy labor continuing to grow, Lutat is concerned that training programs are still too few to meet future needs.

“There are only about a half-dozen programs in the country that are training people to the right level,” he said.

He hopes corporate leaders in the field will begin to understand the challenges a talent deficit could pose for the industry. Filling what could be another 240,000 positions over the next decade or so is going to require more aggressive training efforts.

“I’d like to see a little bit more involvement from the major manufacturers, because this is a profession that’s not going to stop growing in the triple digits for some time to come,” he said.