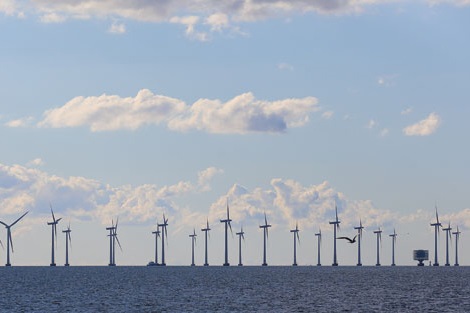 A large offshore wind turbine being tested in Denmark set a record of 9 megawatts (MW) of power on Dec. 1, 2016. The V164 turbine produced almost 216,000 kilowatt-hours (kWh) in 24 hours, enough to power approximately 7,200 homes in the United States for an entire day.

This broke the energy generation record for a commercially available offshore wind turbine, according to a press release from MHI Vestas Offshore Wind, which operates the turbine. For comparison, in 2015, the average annual electricity consumption for a U.S. residential utility customer was 10,812 kWh, according to the U.S. Energy Information Administration.

The V164 has been upgraded to reach 9 MW; most modern offshore turbines range from 4 to 6 MW. The turbine is 772 feet tall, and its blades are 262 feet long and weigh 35 tons. Its swept area is more than 227,000 square feet—wider than the spokes and cable cars of the London Eye.

The V164 has a 25-year lifespan, and 80 percent of the machine can be recycled and reused. It is also built to withstand high North Sea winds ranging from 27–56 miles per hour (12–25 meters per second), according to an article in Science Alert.

MHI Vestas Offshore Wind expects to deploy the V164 in Europe now that the turbine’s testing is complete. The plan is to get the turbine connected to the grid as quickly as possible.

“We are confident that the 9-MW machine has now proven that it is ready for the market,” said Torben Hvid Larsen, MHI Vestas Offshore Wind CTO, in a press release. “We believe that our wind turbine will play an integral part in enabling the offshore industry to continue to drive down the cost of energy.”

The company is specifically working to deliver affordable offshore wind-power technology. The larger and more powerful wind turbines become, the more energy they can generate with fewer turbines needed in a wind farm. This improves their efficiency and reduces the costs of wind-power renewable energy.

The V164 can save on capital expenditure and operating costs, because fewer machines will be needed to meet wind-power capacity levels.

Wind power has the potential to produce up to 40 times the electricity that the world currently consumes, according to an October 2016 article in Business Insider. In addition, scientists estimate the cost of wind energy may drop by a quarter by 2030, as turbines become more efficient at converting wind power into electricity, according to a paper published in Nature Energy. The survey of 163 wind-power experts said they expect turbine size to increase and wind-power costs to decrease.