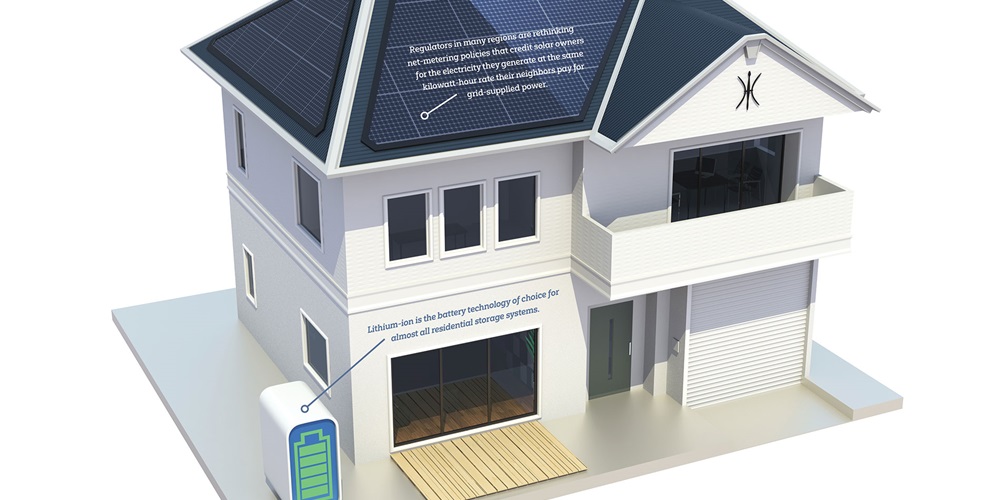 The market for residential energy-storage systems may be small, but it’s gathering speed. These systems require professional installation, so they represent a new market for electrical contractors. As manufacturers and utilities move beyond the pilot stage and into the mainstream, this is a good time for ECs to learn more about the batteries that keep these storage systems up and running.

First-quarter 2018 sales figures underscore this market’s trajectory. In total, the United States added 126 megawatt-hours (MWh) of energy-storage capacity during that time, a 26 percent increase over the previous quarter, according to the Q1 2018 U.S. Energy Storage Monitor report from GTM Research and the Energy Storage Association. Residential installations totaled more than a quarter of that new capacity. Moreover, the report predicts annual residential installs could top 1,000 MWh by 2020, and the market’s value could reach an estimated $1.5 billion by 2023.

A combination of falling battery prices and changing incentives for rooftop solar are helping to drive this growth. Regulators in many regions are rethinking net-metering polices that credit solar owners for the electricity they generate at the same kilowatt-hour (kWh) rate their neighbors pay for grid-supplied power. Instead, in states like California and Hawaii, regulators are incentivizing those who can shift their use of solar-generated energy to times when the sun isn’t shining, which reduces the need to fire up expensive and inefficient fossil generation to meet early-evening peak electricity demand.

While solar-heavy California and Hawaii were responsible for 74 percent of 2018’s first-quarter residential deployments, time-of-use electricity rates also are starting to drive adoption in Arizona and Texas. Customers who choose these plans pay substantially more for each kilowatt-hour during peak periods, in return for extremely inexpensive—in Texas, sometimes even free—electricity other times of the day. By smoothing out demand peaks this way, utilities can defer the need for new generating plants and, potentially, retire the aging coal and natural gas plants typically used for peak operations.

Lithium-ion (li-ion) is the battery technology of choice for almost all residential storage systems. This certainly isn’t a new approach, as it has been powering our cellphones and laptop computers for a couple decades now. But for the last decade, manufacturers have been building up their li-ion products to meet the needs of electric vehicles (EVs) and, even more recently, stationary storage systems. Manufacturing capacity has been scaling up at a rapid pace over the last several years, and, though periodic supply shortages have been an issue recently, prices are falling as each new factory opens.

Broadly speaking, the batteries used in energy-storage systems, as well as EVs, are quite similar to those used in cellphones and tablets, according to Ian McClenny, lead analyst for advanced battery research for Navigant Research.

“It’s the same chemistry,” he said. “In general, the big difference in consumer electronics versus large-format batteries is the balance of system.”

McClenny cited the thermal- and battery-management issues that are more important in electric vehicle and storage applications. However, the term “lithium-ion” describes a broad range of chemical combinations that can be adjusted to meet different needs, depending on the device a battery is meant to support. All use lithium in some form, but they combine it with various other materials—including nickel, manganese, cobalt and aluminum—to create the performance characteristics required by any specific application. In general, energy and power are the two characteristics that chemistries are adjusted to enhance.

These two terms may sound similar, but they actually describe two different aspects of battery performance. Energy (expressed in kilowatts or megawatts) is simply the amount of “work” stored in the battery—more energy means a greater distance between charges in a vehicle or more talking time on a mobile phone. Power (expressed in kilowatt-hours or megawatt-hours) is the rate at which that energy is discharged, according to Daniel Abraham, a materials scientist at Argonne National Laboratory and a leading li-ion battery researcher. So a higher-power battery can mean faster acceleration in a vehicle. Additionally, power also works in the opposite direction, resulting in the possibility of faster recharging.

While the ideal, of course, would be a battery with both high energy density and high power density, that goal simply isn’t possible with today’s technology, at least without resulting in unstable battery conditions. As a result, manufacturers tinker with the chemistries to best match the needs of specific applications, which also includes the number of charging cycles the chemistry allows before power declines to unacceptable levels.

This loss of power density is one reason mobile phone batteries appear to lose the ability to hold a charge after a couple years—or, approximately 500 cycles. This is the tradeoff that enables a lightweight, relatively low-cost battery capable of running multiple applications on your phone.

In residential-storage applications, however, energy density is generally the more important characteristic. Unless you’re helping to support utility grid operations, you’ll likely be discharging at a steady rate. And, given the expense of these units and the fact they’re most often installed along with a rooftop solar system, a lifespan of 10–20 years or more will be a high priority. According to James Frith, energy-storage analyst with Bloomberg New Energy Finance, this equates to approximately 5,000 cycles.

It’s all about the chemistry

These variations in cycle lifespan are all related, in large part, to the chemical makeup of every battery’s major components. Batteries of a size used in a vehicle or storage system are actually collections of individual battery cells. These cells, which might look similar to a cylindrical AA-size battery or more like a metallic wafer, each incorporate three major components: the cathode (positive terminal), anode (negative terminal) and a transport medium called an electrolyte. A membrane separator between the cathode and anode prevents these two elements from touching and creating a short circuit. Li-ion batteries generate electrons (or current) as an offshoot of the chemical reaction that occurs when lithium ions travel from the anode to the cathode. During recharging, those ions pass back through the electrolyte to reattach to the anode.

While the anodes of li-ion batteries are almost always graphite, the chemical makeup of the cathode can vary. For example, the batteries for laptops and mobile devices often use lithium cobalt oxide for the cathode. Batteries used in stationary storage systems, however, more frequently use a combination of nickel, manganese and cobalt in various proportions, according to Frith. Each shift in the ratio of these ingredients comes with its own benefits and risks.

“By playing with the ratio—by removing cobalt and increasing the amount of nickel, you increase the energy density,” he said. “But that starts to raise concerns regarding the stability of the material and how many cycles you can get out of it. Lots of companies are working on this at the moment.”

Reducing the proportion of cobalt from the mix, or even replacing it completely, is a goal for several reasons, beyond the possible boost that move could provide to a battery’s energy density. First, as Frith noted, cobalt is expensive, so limiting its use could help bring costs down. Second, the material raises serious ethical concerns. More than two-thirds of the world’s cobalt is currently supplied by mines in the Democratic Republic of Congo, according to the research group Benchmark Mineral Intelligence. UNICEF estimates 40,000 children now are working in those mines.

A technology with lasting power

Li-ion is likely to remain the technology of choice for stationary and EV batteries, though manufacturers will continue to improve on its current performance.

“I think the lithium-ion range of chemistries will be around for a long time—at least a couple of decades,” Abraham said.

Though electric vehicle batteries are anticipated to support up to 10 years’ worth of charging cycles, their power density will eventually fall below acceptable levels. This isn’t a problem today; EVs simply haven’t yet been on the road in large enough numbers. Some carmakers are beginning to experiment with incorporating used EV batteries into stationary storage systems. However, others suggest recycling those batteries to harvest the cobalt and other valuable materials could be more cost-effective.

The loss of power density might not be a critical fault in stationary storage applications. Abraham said the U.S. Department of Energy recently awarded Argonne a grant to study such secondary battery uses.

However, Navigant Research’s energy- storage analyst Ian McClenny said there are a range of economic and technical factors that could make this approach more complicated than a simple plug-and-play swap.

"You have to disassemble the battery pack, check the life of each individual cell and then group each cell by life expectancy,” he said. “It also depends on the battery type—some aren’t conducive to stationary uses.”

With batteries accounting for 35–50 percent of a storage system’s total cost, the resulting cost reduction might only represent a 10 percent savings, versus a brand new system. Plus, McClenny said, older batteries could present ongoing maintenance issues that would add cost over time.