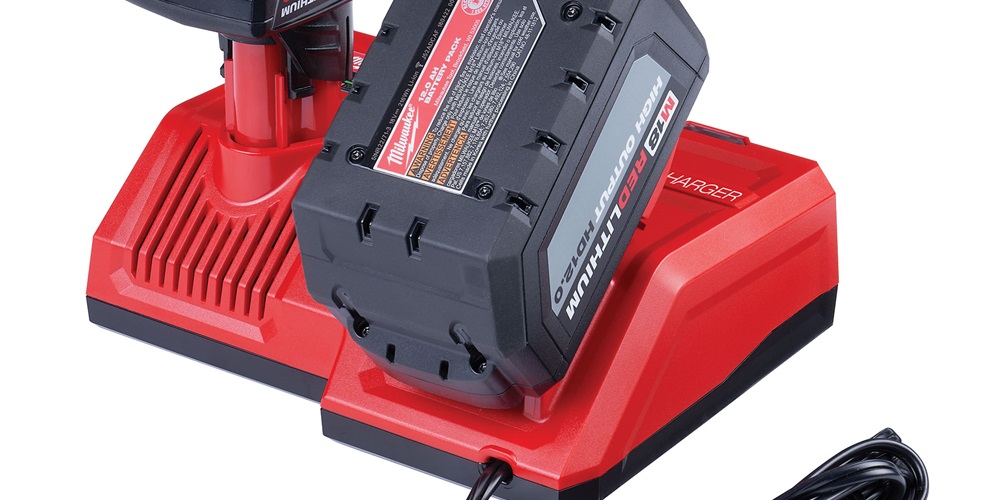 Few would argue that lithium-ion batteries have not significantly changed the power hand tool market. Not only have lithium-ion cordless tools replaced nickel-cadmium (NiCad) batteries for professional users, but they also have expanded the offerings of cordless tool products, and some are now touted as meeting or exceeding productivity of comparable corded tools. For cordless tools used by the trades, including electricians, this has happened over the relatively short time span of about a dozen years.

According to the website Battery University, lithium-ion is the fastest growing and most promising battery chemistry. Sponsored by Cadex Electronics, the information that follows is summarized with permission from a BatteryUniversity.com overview of lithium-ion technology.

G.N. Lewis first began working with the lithium battery in 1912. Lithium showed promise early on because it is the lightest metal, has the greatest electrochemical potential and provides the largest energy density by weight.

However, initial attempts to create rechargeable lithium batteries failed because of the metal’s instability, especially during charging. As a result, the focus of research shifted to pursue a nonmetallic lithium battery using lithium-ions. Though lithium-ion is slightly lower in energy density, this compromise proved worth it because it is safe.

In 1991, Sony Corp. brought the first rechargeable lithium-ion battery to the commercial market.

Lithium-ion’s energy density is typically double NiCad, but the technology has potential for even higher densities. In terms of discharge, lithium-ion’s load characteristics behave much like NiCad.

“The introduction of the power cell made power tools with li-ion batteries possible,” said Isidor Buchmann, CEO of Cadex Electronics.

Another advantage most other chemistries can’t claim, lithium-ion batteries don’t suffer from the memory problem, and the user never has to complete scheduled cycling to prolong the battery’s life. Furthermore, its self-discharge is less than half of NiCad, meaning lithium-ion batteries are well-suited to modern fuel gauge applications. Finally, lithium-ion cells are easy to dispose of.

Lithium-ion does have its drawbacks, however. For instance, it is fragile, so it requires a protection circuit, which limits each cell’s peak voltage during charge and prevents the cell voltage from dropping too low on discharge. In addition, temperature extremes must be prevented.

“New is intelligence in the battery and encryption,” Buchmann said. “This prevents clone replacement, but testing becomes difficult.”

“Battery technology is evolving at such a rapid pace, but with the addition of higher capacity cells available today, manufacturers must leverage more innovative pack designs and electronics to manage the increase in performance,” Diop said.

Performance depends on much more than just a voltage number, Diop said.

“Among the biggest challenges driving this are additional run-time, power output and maintaining thermal capabilities. In addition, as power levels go up in the system, manufacturers need to also continue advancing the electronics to communicate and regulate to maintain full system synergy,” he said.

Diop said tool users must have the ability to find a cordless battery system that is compatible with the breadth and depth of work they need to do.

“For instance, with the Milwaukee M18 system, users have a broad range of solutions that work off one battery platform and also a system comprised of over 175 tools and growing to satisfy the various needs and keep them productive.

“This is huge, because we’re not asking users to change their battery systems as we introduce new technology. As new battery technology is introduced, it works seamlessly into the M18 battery system without the need for users to worry about the ominous question: ‘Will this new battery fit all of my old M18 tools?’ We offer three segments of batteries, optimizing performance at every level. Milwaukee Red Link Intelligence is a fully compatible platform of communication between the tools, chargers and batteries,” Diop said.

Milwaukee has improved its lithium-ion batteries and upgraded motors and electronics to create tools with more output than a 15-ampere corded tool, Diop said. These products include a reciprocating saw, 7¼-inch circular saw, table saw, large angle grinder and chain saw, with more to come.

“There are clear benefits of lithium-ion that anyone can claim,” Diop said. “But other benefits come only when the very best cell chemistry, electronics and pack construction are implemented. It is crucial for tool users to understand that all lithium batteries are not created equal.”

“Five years ago, we packed 3.3 Ah [ampere-hours] in our 22-volt [V] battery. The battery had 18,650 size cells versus those used today, which have 22V, 4.0-Ah batteries with more run time, more power and are smaller in size. This provides great balance of performance, size and weight. For users doing more demanding work, there is the 22V, 8.0-Ah batteries—perfect for electricians drilling hundreds of holes through wood structures,” Chetelat said.

Both the 22V, 4- and 8-Ah batteries are built with 21,700 cells, he said. These larger cells provide more power, run cooler, are more efficient and deliver more run time.

“Hilti batteries have sealed electronics, robust frames and soldering connections that withstand the harsh conditions encountered on job sites,” he said. “They are backed for two years of wear and tear on professional job sites.”

Hilti also has added new versions of its 36V and 12V lithium-ion batteries. The larger battery is used on the company’s 36V combihammer for driving ground rods and drilling through concrete walls for conduit.

“Our 36V lithium-ion platform tools outperform the corded equivalent,” Chetelat said. “Our lithium-ion SDS Max combihammer drills faster and breaks faster than the equivalent corded tools on the market, even our own corded model.”

“Simply put, lithium-ion increases the power-density-to-volume ratio. That means manufacturers can make smaller batteries that offer increased power versus previous generation batteries. Bosch is able to get 87% more power out of a slightly larger, next-generation battery.

“With the help of greater power efficiency found in 21,700 lithium-ion cell technology, Bosch has developed batteries that bring all of the capability of a lithium-ion battery into a smaller, lighter package. The 21,700 cell introduces much more active battery volume in a pack that’s only slightly larger than the previous 20,700 cell packs,” Sherrod said.

Sherrod said Bosch has lithium-ion powered cordless rotary hammers available now that perform at the level of a corded tool.

There is a full suite of Bosch 12V lithium-ion tools for drilling and fastening applications. The 18V line includes everything from drill/drivers and impact/drivers to rotary hammers.

Lithium-ion batteries offer many advantages for cordless hand tools, and tool makers actively promote them. There also are what some call limitations. Below is a short summary prepared from information provided courtesy of Battery University (batteryuniversity.com).