How Do You Office? 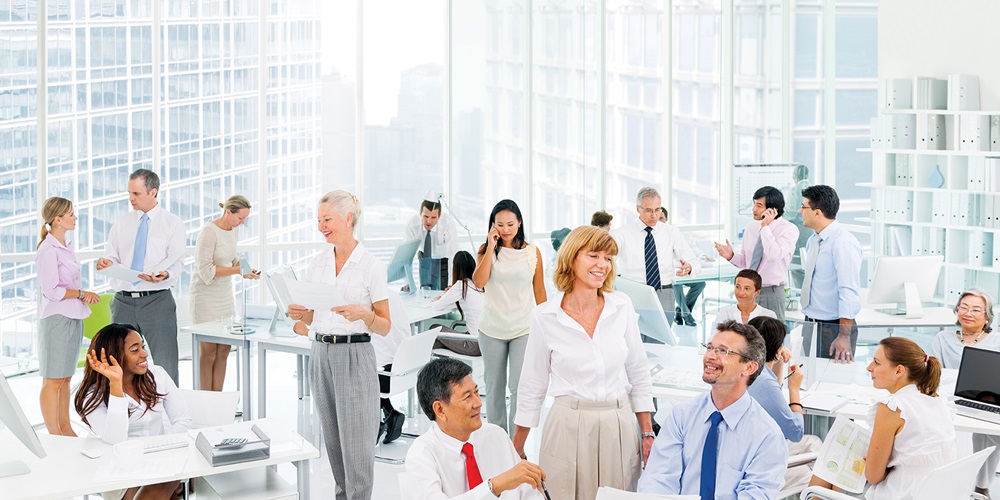 “Space matters” is the new mantra as the office concept undergoes some radical rethinking. Today, square-footage is often decreasing as occupancy increases. Open landscapes rule as corner offices disappear. Cubicles are giving way to collaborative worktables. Work from home? No problem. Contractors and designers who have been following these trends and understand their objectives will best meet clients’ needs who adopt this new work environment.

In essence, how and where we work are becoming untethered from generational norms. It is changing to such an extent that “to office” may land in the dictionary some day as an accepted verb. “How do you office?” is now a legitimate question.

In this case, the tech industry has led the way. Google is not alone, but the company is noteworthy in how it uses the office environment to stimulate creativity and productivity. Its Mountain View, Calif., headquarters features elements that might sound silly but contribute to an important workplace vibe. For example, employees can take a slide from the second floor down to the first. Fun, stimulating and different are all environmental definers to help drive employee performance for Google and other tech firms.

“Picture an office where you put your personal belongings in a locker and find a space you want to work or maybe join a group,” said Janice S. Goldsmith, president, Zeller Realty Group, Chicago. “Laptops facilitate portability as assigned desks are no longer part of the equation. Some employees might even work from home or their neighborhood coffeehouse.”

Zeller Realty is a commercial real estate firm with $1.3 billion of largely Midwestern investments used for what it calls “repositioning and reintroduction to their markets.”

“The 20-to-35-year-olds are driving the new office,” Goldsmith said. “They welcome the collaborative workspace because it’s what they know. The corner office is a foreign idea. They want flexibility and mobility.”

Another driver is pure economics. After going through the Great Recession, owners and lessees became motivated by economic necessity to reduce office space.

“It’s a ‘chicken-and-egg’ thing when speculating whether new thinking or economic imperatives drove this trend first,” said Michael Cornicelli, executive vice president, Building Owners and Managers Association of Chicago. “It might have been a confluence. Either way, it has accelerated, creating a new normal. This is certainly more a trend than a fad.”

Cornicelli found that another driver is economic and political leaders who seek to attract the tech sector. Elements of the new office are also melding into nontech companies, such as advertising and public relation firms, accounting, design firms and others. One example is the $70 million major rehab of Chicago’s venerable Wrigley Building (a Zeller property), completed in June 2014.

“A large number of our users are adopting the open office,” Goldsmith said. “Single offices are fewer and being replaced by lounge areas, play areas, collaborative areas. In general, I’d say there are very few offices that haven’t been touched by this denser occupant, small footprint trend.”

“Sometimes a more traditional layout is needed,” said Cornicelli. “Yet, sometimes those that you least expect to embrace this new office thinking surprise you. A senior executive with CBRE Group, a major commercial real estate service, adopted this progressive design for a new office here in Chicago. He shared with me that he doesn’t miss the corner office one bit. He loves working from his laptop. It’s his virtual desk and contains the ‘framed’ picture of his wife.”

Jason S. Lewis is president and managing director of Ecospace Commercial, a boutique brokerage firm in Denver. He is finding some surprises as well.

“Law firms are another traditional business not likely to embrace this downsized approach, but we have such a client,” he said. “After co-sharing 250-plus square feet, the owner of this law firm moved to vacated tech company space, transforming his law firm to an efficiently designed 1,500-square-foot office. There’s no mahogany wood conference room with file cabinets or a huge break room and reception area. The new space is now composed of three efficient closed-door offices to accommodate confidential client meetings, a small reception area, and break room.”

Lewis has made new office thinking his mission at Ecospace.

“Our office is 100 percent paperless,” he said. “Everything is routed through our laptops. A single-door office is open to anyone who may require a quiet space.”

He went on to say there will always be a need for some closed offices, but he expects all spaces to have some aspect of the open, collaborative approach over the next 10 years.

The 2012 International Building Code (IBC) Section 1004.2 uses an occupant load of one per 100 square feet for office areas. According to Allan Bilka, R.A., senior staff architect, International Code Council, the provision does not prohibit higher densities as long as the actual occupant load of the office space was considered in the design of the means of egress (e.g., door swing and width, corridor width and number of exits).

“I do not see the International Building Code getting in the way of the trend,” he said.

When it comes to office design, as New York City goes, the rest of the country follows. Tim Wang, director and head of investment research for investor Clarion Partners in New York, stated in a 2013 article for CoStar, “Changing Office Trends Hold Major Implications for Future Office Demand”: “Ten years ago, 250 square feet per office employee was the gold standard in office real estate. Today, that average has dropped to approximately 195 square feet.” CoStar is a commercial real estate information provider based in  Washington, D.C.

In Chicago, Goldsmith sees per-person square footage trending down, though some companies are holding to conventional design. Denver is seeing office spaces of 80 square feet per one employee and smaller.

“It’s shrinking across the country,” Lewis said. “I have one client who has employees ‘office’ in a space with high, long tables featuring six plug-in outlets. It resembles a Starbucks.”

This is where the electrical contractor (EC) comes in.

“When the entire building team gets together to talk problem/­solution early in the design process, the success for a tighter office design is achievable,” Lewis said. “Clients are incorporating motion sensors for lighting and other building operation. Modular furniture is also popular. It’s a win for an electrical contractor who knows how to wire for more automated and flexible office topography and can optimize the operation of sensors.”

When tackling collaborative office space redesigns, Lewis first brings in cultural experts and advisers to meet with the owners to define and align objectives. A meeting with the design team is the second step.

“Much more thought is going into office space than ever before,” he said.

“You are the ones being called upon to design and execute these new offices,” he said. “As an electrical contractor, you make it all happen through your electrical design, plug loads, wiring and other metrics. Tell the story that illustrates a successful design for a client.”

While new construction makes designing for the new office space rather easy, retrofits or office remodels aren’t always as simple. In fact, some buildings don’t lend themselves to a higher occupancy.

Kimberly A. Marks, ASID, NCIDQ, is a registered interior designer and owner of The Marks Design Group in San Antonio. She has spoken on the challenges of the new office design trends within existing buildings.

“Designing one or more per 100 square feet per person is one thing, but if you apply it and exceed the design of the building as built, you have a problem,” Marks said. “Tight employee square-foot ratios can stress HVAC, plumbing and electrical, even parking not designed for a large number of added employees. It’s one thing to design a new building as a high-occupancy office. It’s not so easy to redesign for a new air handler needed for high occupancy in an existing seven-story building or add a stairwell.”

Marks found light industrial buildings to be very amenable to new office transformations. Largely suburban, such properties have made for easier build-outs with mechanicals and parking.

Interestingly, she found electrical load did not necessarily increase when the right lighting strategy and use of efficient controls and fixtures were used.

“The use of LED is huge for load offset in combination with other technologies and products that use less electricity,” she said. “They help mitigate increased occupancy. Whole-building systems help too. More plumbing but with lower water usage also helps accommodate higher occupancy.”

Goldsmith hasn’t seen retrofit problems in the Chicago market based on the building stock her firm has acquired.

“In our city, almost all of the buildings have been touched by remodeling, sometimes several times. We found our downtown buildings can accommodate increased occupancy. We’re not starting at square one. Mass transit is also well used in our city, so parking is less a concern.”

“Understand the client’s business model, their work flows, how they intend to work,” Cornicelli said. “The better you know the trend of what the new office can be, the better you will be ready to respond.”